Joyce Banda became the first female president of Malawi, second in African history, when she took office in 2012 following the death of President Bingu wa Mutharika.

In this week's Headliner, Mehdi Hasan asks Banda about aid and development, as well as the allegations surrounding the $250 million corruption scandal known as "Cashgate".

"I don't have to clear my name," says Banda, who is now a member of Club de Madrid, an assembly of former presidents and prime ministers who continue to support and foster democratic values and leadership.

"Because Malawians know what I did, and my conscience is very clear ... and that I will continue, for as long as I live, to raise my voice against corruption."

When asked if she would run for president again following her re-election loss in 2014, Banda says she is at the will of the people.

"If they want me to run again I'll run again, it's not a priority for me. It doesn't matter. I believe that if a leader, and you're serving your people, you don't have to be in state house. You can serve your people at any level at any rate," says Banda.

Asked about why she argues that Africa needs more trade, Banda stated: "Africa is not poor. We are rich in our natural resources. So what we need to do, in my opinion, is to set our priorities right. Is to sit down and say how can we best use our natural resources for the benefit of our people?"

At the time of her presidency, Joyce Banda was named one of the 100 most influential people in the world by various publications. 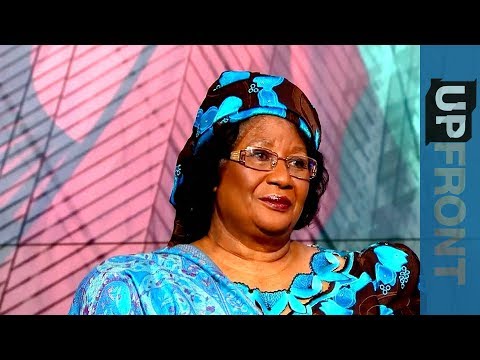 Joyce Banda became the first female president of Malawi, second in African history, when she took office in 2012 following the death of President Bing...