Caught in the middle of a bitter Saudi-Iran rivalry, worries are growing about the outlook for the Lebanese economy. Growth has slowed to just over two percent a year from an average of eight percent before the war in Syria. But regional rivalries between Saudi Arabia and Iran have raised fears of a Qatar-style blockade.

The recent resignation of Prime Minister Saad Hariri in Riyadh under mysterious circumstances has not been resolved. Just before he quit, the government had managed to pass a budget after years of political stalemate.

If this escalates, this is going to be a lose, lose, lose situation.

Sami Atallah, director of the Lebanese Center for Policy Studies

Sami Atallah, the director of the Lebanese Center For Policy Studies in Beirut assesses the impact of this new crisis on Lebanon, with fears of major complications and effects on the Levantine country on the back of an already protracted issue for Lebanon, that being the 2011 war in Syria and the heavy influx of refugees that have put a drain on its resources.

The significance of this new situation, however, lies in the potential for Saudi Arabia, a renown ally of Lebanon, to escalate the situation and impose sanctions.

"It is hard to predict. We are not sure to what level this may escalate. Events are unfolding on a daily basis and we are monitoring them to see if there are going to be certain economic measures that could in fact influence the Lebanese government," says Atallah. "If there are going to be any sanctions, this is going to affect Lebanon as a whole. It is going to affect the whole country. It is unlikely that these sanctions will be able to distinguish between those who support Hezbollah and those who do not. Most people will be hurt by this, if not all. There will be major collateral damage."

"Lebanon is stuck between two regional powers with different objectives that they're trying to deal with." 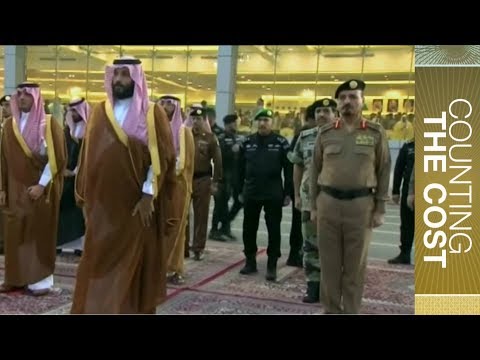 Caught in the middle of a bitter Saudi-Iran rivalry, worries are growing about the outlook for the Lebanese economy. Growth has slowed to just over tw...