In May this year a suicide bomber, Salman Ramadan Abedi, targeted an Ariana Grande pop concert in the UK's Manchester Arena, killing himself and 22 members of the public and injuring scores of others - many of them teenagers or children (the youngest victim was an eight year old girl). It was the worst terrorist atrocity in Britain since the July 2005 London tube bombings and ISIS subsequently claimed responsibility, hailing the perpetrator as a "soldier of the caliphate".

Abedi was a 22-year-old British Sunni Muslim, born in Manchester to a family of Libyan refugees who had settled in the UK after fleeing the government of Muammar Gaddafi. As might be expected, his actions attracted almost universal condemnation, not least by the Muslim Council of Britain, whose secretary general Harun Khan was quick to denounce the attack as both horrific and criminal. "My thoughts and prayers are with the victims and their families," he said. "May the perpetrators face the full weight of justice both in this life and the next."

Such sentiments were echoed time and again in the days that followed by many Mancunian Muslims who were as heartbroken and appalled as anyone else that such an outrage could have happened in their proudly diverse and tolerant city.

But some were fearful that, as has often happened in the wake of other attacks in the UK, their faith might be held responsible by anyone predisposed to look for stereotypes or scapegoats. Those fears weren't without substance; it is unlikely to be a coincidence, that in the month after Manchester bombing, 224 incidences of anti-Muslim hate crimes were reported in Britain - an increase of 505% on the same period in 2016.

Nevertheless, as reporter Hamish Macdonald discovered for this film, the incident did raise complex questions in the aftermath about how diverse communities in Britain should deal with extremism in their midst and what more the authorities should be doing to promote an honest debate about how that radicalisation has been allowed to take root.

While he found no shortage of people in Manchester willing to have that discussion, however difficult it might be, the UK government was wrestling less successfully with a related issue. Over the summer of 2017, Prime Minister Theresa May came under pressure to make public the findings of a Home Office report into the foreign funding of would-be jihadists in Britain.

The report, widely believed to show that Saudi Arabia is one of the principal backers of such activities was commissioned in 2015, but has never been released. The government says it is because the report is not yet complete, critics say it is because it would prove embarrassing to relations between the United Kingdom and a close ally and purchaser of British arms. 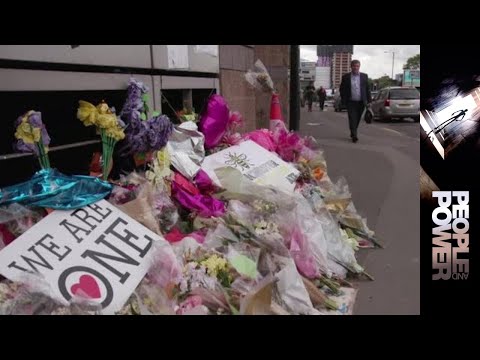 In May this year a suicide bomber, Salman Ramadan Abedi, targeted an Ariana Grande pop concert in the UK's Manchester Arena, killing himself and 22 me...