When a certain kind of music full-on defines the sound of an era, it’s impact is massive. Goldie, the UK producer/DJ who helped bring the crackling kinetics of drum ‘n’ bass to London during the ‘90s is heralded as icon of the music. Melding the hyper beats of acid house, jungle, trance and other groove-adelic sounds, his inspired clatter and soulful melodies helped propel a decade of raves and created some of the most enticing electronic records ever. His 1995 ‘Timeless’ is a classic example of underground sounds being embraced by a wider audience. To celebrate the arrival of his latest album, ‘The Journey Man,’ the 53-year-old, who has been both visual artist and actor along the way, met up with Vevo’s Anupa Mistry at an NYC yoga studio to explain a bit about himself. Surviving a near-death accident, discovering the pleasures of zen thought, the celebrity life his breakbeat skills brought him, how his “alchemy” process can be arcitected visually, and the new season of ‘Rick and Morty' are all on the agenda. 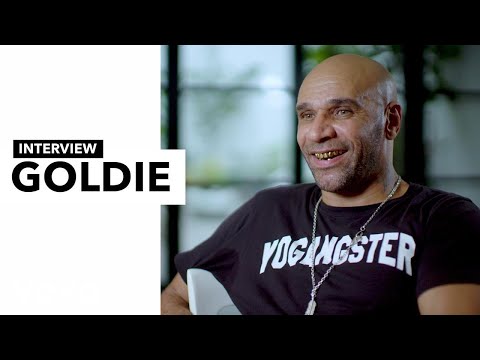 Goldie: The Journey Man (Vevo) When a certain kind of music full-on defines the sound of an era, it’s impact is massive. Goldie, the UK producer/DJ wh...