In his own words, Mohsen Lihidheb is "a nobody and everybody at the same time".

The former post office worker from Zarzis, Tunisia, used to lead an ordinary life, until he was inspired to do something more meaningful.

Having grown up by the sea, Mohsen has been collecting objects he found on the beaches of Zarzis for 23 years - items like bottles, buoys and dolphin bones. He puts them on display at this own small museum, or turns them into art installations.

With his artistic arrangements, Mohsen hopes to create awareness about the environment and the refugee crisis. "When I start an installation each piece has its own story," he says. "We can't clean the environment if we don't recognise the existence of waste and our role in producing it. We must manage it."

Since the refugee crisis took hold in the Mediterranean, Mohsen has encountered a growing number of shoes washed up on the beach. Many of them are on display at his own museum, with some of them dangling from a shelf by their laces. He gives them a spin as he walks past them.

"Giving movement to the shoes is my way of giving a little bit of life back to the owners who died at sea," he says.

Still, not everybody understands Mohsen's fascination with the rubbish that washes up on the shores of Zarzis.

"Many people in Zarzis didn't accept my father's actions. They wondered about what he did," says Mohsen's son Youssef. "In Zarzis ... people only do something if they can benefit from it."

"I was happy to see him pursuing his hobby, but I was also worried about him. Because if you left him alone, he wouldn't stop," he adds.

Mohsen continues his work unabated. "I'm concentrating life and the universe in my small space," he says. "I'm trying to change the perception that each thing has only one identity ... And I try to provoke the viewer so he sees and feels things differently." 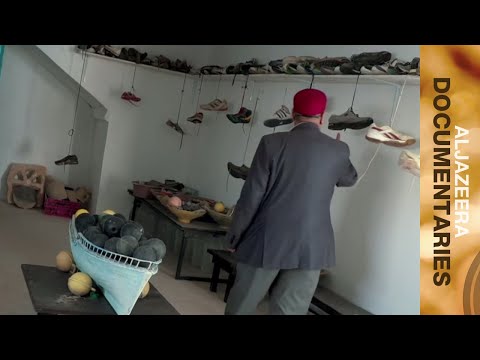 In his own words, Mohsen Lihidheb is "a nobody and everybody at the same time". The former post office worker from Zarzis, Tunisia, used to ...