The Largest Creatures Discovered In The Amazon Jungle

The Amazon is an incredible place teeming with many different forms of life. It’s the largest rainforest on Earth, and is so enormous that it’s bigger than the next two rainforests combined! Although there are many cute and curious creatures within the jungle, there are of course some dangerous ones as well. If you decide to go on a jungle adventure, we’ll let you know which animals you should definitely avoid. Some of them, like the assassin bug, might seem pretty innocuous at first glance but it’s responsible for a shocking number of fatalities. If you see a huge shadow looming above you, you might just be standing underneath a massive harpy eagle. Since their claws are as big as those of a grizzly bear, they’re definitely a creature you want to avoid! It might be hard to avoid running into a Brazilian wandering spider, since they enjoy hiding in small crevices, until they strike with their toxic venom. When you think of dangerous creatures lurking in the jungle, you probably think of jaguars and green anacondas, and don’t worry we have those on our list! We’ll also tell you about the heat-sensing pit viper who has a venomous bite you won’t want to mess with! The massive Amazon River can be a dangerous place as well, as it’s known to harbor the aggressive bull shark that stalks prey close to shore, as well as the sharp-toothed and short-tempered piranhas. 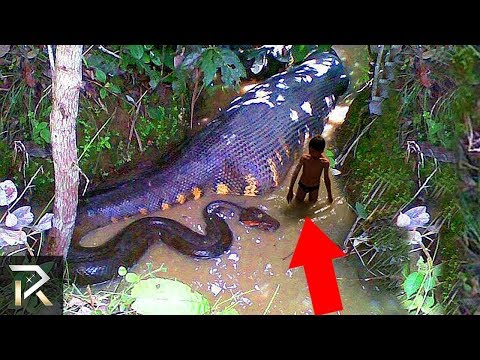 Try out ThePremium Network for free: http://goo.gl/85GZqJ The Largest Creatures Discovered In The Amazon Jungle Subscribe to our channel: http://goo.g...