‘Don’t talk to me about my timing.’ — Nancy Pelosi gave this final speech on the House floor before sending the articles of impeachment on to the Senate.
» Subscribe to NowThis: http://go.nowth.is/News_Subscribe
» Sign up for our newsletter KnowThis to get the biggest stories of the day delivered straight to your inbox: https://go.nowth.is/KnowThis

In US news and current events today, Nancy Pelosi defended her timing of President Donald Trump's impeachment as the impeachment articles head over to the Senate.

Watch Nancy Pelosi's full speech here:
'Here we are today with the articles of impeachment about to be transmitted to the United States Senate. I was thinking this morning, and mentioned in a previous public event, the midnight ride of Paul Revere: ‘Listen my children and you will hear the midnight ride of Paul Revere.’ Well, listen my children and you will here about an assault on the Constitution of the United States, undermining the republic for which our flag stands by the President of the United States. The President of the United States in using appropriated funds enacted in a bipartisan way by this Congress—funds that were meant to help the Ukraine fight the Russians—President considered that his private ATM machine, I guess, and said he could say to the president [of Ukraine] he could make—‘do me a favor.’ Do me a favor? Do you paint houses, too? What is this ‘do me a favor?’ So we have a situation that is very sad. Don’t talk to me about my timing. For a long time, I resisted the calls from across the country for impeachment of the president for obvious violations of the Constitution he had committed. But recognizing the divisiveness of impeachment, I held back. Frankly, I said this president isn’t worth it. But when he acted the way he did in relationship to withholding funds from Ukraine in return for a benefit to him that was personal and political, he crossed a threshold. He gave us no choice.

I think most Americans would think that voters in America should decide who are president is, not Vladimir Putin in Russia deciding who our president is. I’m very concerned that in all of this, whether it’s withholding funds for the Ukranians—the Ukranian government to fight the Russians—whether it’s undermining our commitment to NATO, whether it’s, again, making decisions of what happens in Syria vis a vis Turkey favoring the Russians, that all roads lead to Russia. All roads lead to Putin. Well some in the administration may think that’s ok. I don’t. But we do insist and wonder why this president and some in this Congress will not come to the defense of our electoral system. By allowing that to happen, denying that it’s happening, placing the blame elsewhere, this is as serious as it gets for any of us. Only the vote to declare war would be something more serious than this. We take it very seriously. It’s not personal, it’s not political, it’s not partisan. It’s patriotic.'

For the latest on impeachment news, Trump, and world news, subscribe to NowThis News. 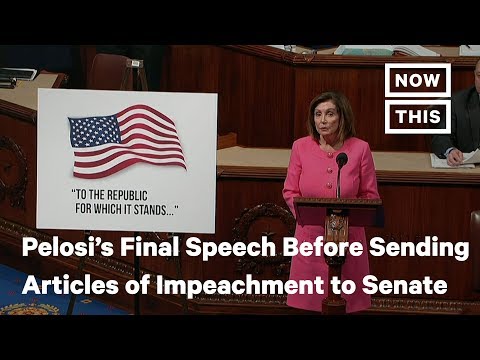 ‘Don’t talk to me about my timing.’ — Nancy Pelosi gave this final speech on the House floor before sending the articles of impeachment on to the Sena...