BIDEN SPEAKS AS GOP SEEKS TO OVERTURN HIS ELECTION: Pres.-elect Joe Biden is in Wilmington, Delaware delivering remarks on the state of the U.S. economy. Roughly 100 miles away, pro-Trump demonstrators are gathering outside the U.S. Capitol protesting Biden’s presidential victory, as both chambers of Congress are debating the certification of the Electoral College’s votes. Since Biden's victory in November, Pres. Trump has made repeated false and imaginary claims of widespread voter fraud, calling the elections ‘rigged’ and ‘stolen.’ Despite GOP attempts to overturn the election, Biden has pushed forward on preparing for his administration to move into the White House on January 20. Over the past few weeks, Biden has been announcing key members of his Cabinet and other advisers, and his nominees have fulfilled his promise to build a Cabinet that ‘looks like America.’ Moments ago, it was reported that Biden is expected to select federal appeals court judge Merrick Garland to serve as Attorney General of the United States. Garland was nominated by Pres. Obama in 2016 for a seat on the U.S. Supreme Court, but his nomination was blocked by Sen. Mitch McConnell and GOP Republicans.
» Subscribe to NowThis: http://go.nowth.is/News_Subscribe
» Sign up for our newsletter KnowThis to get the biggest stories of the day delivered straight to your inbox: https://go.nowth.is/KnowThis 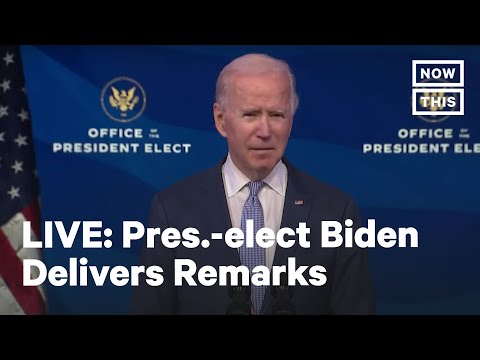 BIDEN SPEAKS AS GOP SEEKS TO OVERTURN HIS ELECTION: Pres.-elect Joe Biden is in Wilmington, Delaware delivering remarks on the state of the U.S. econo...