BIDEN SPEAKS AFTER ATTACK ON U.S. CAPITOL: Pres.-elect Joe Biden delivers remarks in Wilmington, Delaware after Congress certified his victory as the official President-elect of the United States. He planned to speak yesterday about the state of the U.S. economy, but had to change course to discuss the domestic terrorist attack on the U.S. Capitol. He called the attack an ‘assault on the most sacred of American undertakings: the doing of the people’s business,’ and called on Pres. Trump to denounce the violence and send his supporters home.

Today, Biden is expected to formally announce Merrick Garland as his nominee for United States Attorney General. Garland was nominated by Pres. Obama in 2016 for a seat on the U.S. Supreme Court, but his nomination was blocked by Sen. Mitch McConnell and GOP Republicans. The selection of Garland reflects Biden’s desire to reestablish a once-independent Justice Department—a tradition lost under Attorney General Bill Barr’s increasingly politicized department where he often served as the personal lawyer to Trump rather than the country’s lawyer.

Biden’s pick comes at odds with progressive calls for a woman or person of color to preside as the U.S.’s leading law enforcement officer, as he promised to build a Cabinet that ‘looks like America.’ Garland, who is known for his centrist viewpoints, will oversee decisions concerning civil rights issues as well as any potential investigations into Trump if confirmed.
» Subscribe to NowThis: http://go.nowth.is/News_Subscribe
» Sign up for our newsletter KnowThis to get the biggest stories of the day delivered straight to your inbox: https://go.nowth.is/KnowThis 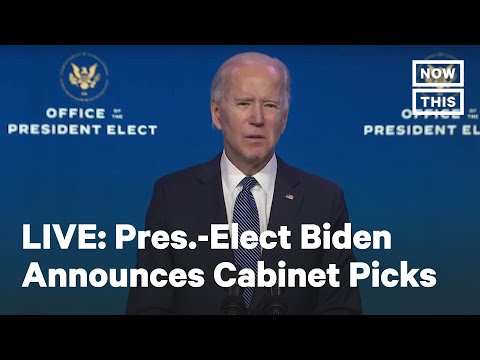 BIDEN SPEAKS AFTER ATTACK ON U.S. CAPITOL: Pres.-elect Joe Biden delivers remarks in Wilmington, Delaware after Congress certified his victory as the ...