TRUMP DOUBLES DOWN ON ATTACKING WOMEN POLITICIANS, MEMBERS OF PRESS: Pres. Trump is in Lititz, where he is holding his second of three Pennsylvania rallies today. While speaking with supporters earlier today in Allentown, Trump targeted Kamala Harris by telling the crowd that she ‘will not be the first woman president,’ despite the fact she is running for vice president. He mocked Harris for her laugh during her interview on ‘60 Minutes,’ saying ‘It was a total joke of a show... I said, “Is there something wrong with her, too?“’ and added that the country cannot have a ‘socialist president… especially a female socialist president.’ He targeted several other women in his remarks, including NBC’s Savannah Guthrie, CBS’s Lesley Stahl, and Speaker Nancy Pelosi, before reiterating his stance on ‘saving the suburbs’ for suburban women. Recent polls show that suburban women in swing states—groups of voters that helped deliver Trump the White House–are now leaning more towards Biden.
» Subscribe to NowThis: http://go.nowth.is/News_Subscribe
» Sign up for our newsletter KnowThis to get the biggest stories of the day delivered straight to your inbox: https://go.nowth.is/KnowThis 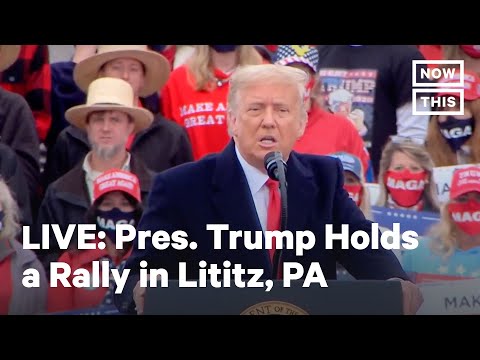 TRUMP DOUBLES DOWN ON ATTACKING WOMEN POLITICIANS, MEMBERS OF PRESS: Pres. Trump is in Lititz, where he is holding his second of three Pennsylvania ra...