On June 5, several countries, including Saudi Arabia, the United Arab Emirates, Bahrain and Egypt severed diplomatic ties and cut off sea and air links with Qatar, accusing it of supporting "extremism" and their regional rival, Iran.

Qatar may have been isolated economically by its Gulf neighbours, but its financial markets have stabilised after an initial week of losses.

The government says it has the resources to cope with the regional sanctions. And Qatar's finance minister is warning that if Qatar loses money, the countries behind the embargo will lose money, too.

Credit rating agency Standard and Poor's says Qatari banks are strong enough to hold on, even if all the Gulf money - and more - is pulled out. And it's not just Qatari banks, the UAE's main lenders could also lose out from a slowdown in business coming in from Qatar.

Al Jazeera: What impact has the siege had on the day-to-day life of normal citizens here in Qatar, both Qataris and expats who are living here?

Ahmed bin Jassim Al Thani: When you talk about the impact, if we look at the Qatar economy, the economy is strong, resilient … All the indicators talk about Qatar's economy being the 18th-most competitive in the world, the second in microeconomic efficiency, good efficiency, so they indicate a very strong financial position for Qatar. Qatar is one of the strongest economies in the world.

Looking at the diversification of the economy of Qatar, 61 percent of GDP come from non-oil and gas. Our import - our trade with the world - is 330 billion Qatari riyals. It is a diversified economy, as I mentioned, supported by the Qatar Vision 2030. All these indicators and the strength of Qatar and Qatar's economy gives us some sort of resilience and immunity to deal with such a situation.

The blockade is mainly on our land border, around 14 percent of our total trade. We had a clear plan for such a situation; it happened, how are we going to deal with it … immediately within hours, we activated this plan. The alternative source is already identified, and the alternative point of entrance, either by air or by sea, was immediately diverted and we are seeing the supply chain moving very smoothly.

Therefore, [although] people in Qatar are used to buying milk and chicken from Saudi Arabian producers, they are now seeing it from other countries.

Al Jazeera: You managed to change that, as you mentioned, in just a few hours. Can you explain how? Aside from these impacts, has there been any other impact or has the impact of this siege been minimal?

Al Thani: The impact of the siege, or the impact on the economy of Qatar was very limited. As I said, we have a clear plan and we know exactly how to deal with it. What's more, we have built a reserve, a strategic reserve, be it food or other materials, for our projects. That is why we were ready to deal with such a situation immediately, within hours.

This plan has been identified. The source has been activated, an alternative source, and we started to import … you mentioned, milk, immediately from Turkey and other sources, and as you can see, the shelves were always full, never empty after the first day of the blockade. We really aren't talking about the primary need for the consumer. We are talking about maintaining the level of the lifestyle that Qataris and those who live in Qatar experience - that's where we are.

Today, I'm talking to you, and I am confident, that all the supply chains, from air or by sea, are working smoothly.

The goods that used to go to Jebel Ali [in the United Arab Emirates] and re-exported here to Qatar, have been diverted to Sohar and Salalah [in Oman] and by agreement with the main ship lines, we have also announced a direct shipping line from Salalah and Sohar to Hamad Port. We also have a new line which will come directly from India to Hamad Port, so even with the challenges that we are facing, we are creating opportunities for others.

Al Thani: All the infrastructure projects, even related to the 2022 World Cup, or related to the actual plan for the infrastructure upgrade that we are doing, metro, highways and others … all will be on schedule. There is no impact on it, and the primary materials … some are manufactured here in Qatar, like the cement and the steel and the sand … it is available here and now for Qatar. We even export this for others … immediately, as I said, we have a strategic reserve for more than a year...

Watch the interview for more. 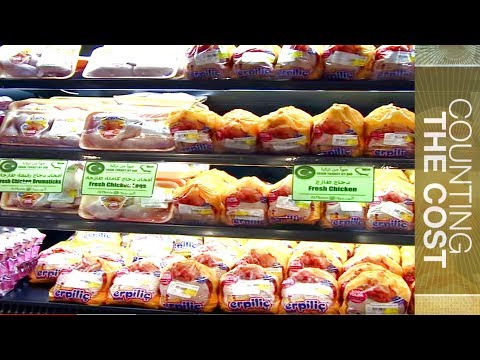