Rey Pila formed in Mexico City in 2009 – their name means King Battery in Spanish. The quartet, fronted by Diego Solórzano, specializes in synth-driven dance-rock – NME says they “sound like they were raised on a diet of The Cars, David Bowie and Kraftwerk.” In 2012 they relocated to New York City and started work on its second album at DFA Studios (home of LCD Soundsystem). That's when Julian Casablancas was knocked out by their song “Alexander” and signed them to his Cult Records label. The Strokes singer produced three tracks on 'The Future Sugar,' which finally emerged in 2015. Rey Pila hit the road with Interpol, the Rentals, and Brandon Flowers and took a “less is more” approach to their latest EP, 'Wall of Goth,' featuring the video “Ninjas.” In ‘Vevo Meets,’ Diego Solórzano and Rodrigo Blanco explain the band’s roots, seeing Alanis Morrissette onstage, being a “grabber” while watching scary movies, and the dangers of traveling the highways as a touring band. 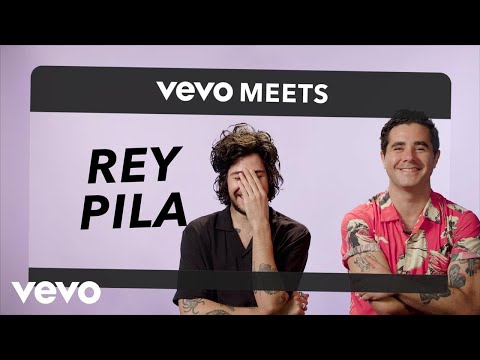