History Channel's hit drama Vikings features many characters who wear tattoos to play up their ancient tribal nature. Of course, the actual history can't say for sure if that was a cultural truth. Historical accuracy is always slippery for television dramas, and on top of that, the records pertaining to the Viking people as they lived are all from third parties, since they kept no written records of their own.

For instance, Rollo Sigurdsson, Ragnar Lothbrok's brother, is loosely based on a man that lived at the end of the ninth century and did indeed abandon his Nordic roots to become the first Duke of Normandy. Rollo does exactly this on Vikings, although the real-life man almost certainly wasn't at the actual sacking of Paris and was definitely not related to Ragnar. In fact, Ragnar can't be proven to ever have existed at all outside the written epics in which he's featured.

Whether or not the Viking people were tatted up like the characters on the History Channel show, some of the ink shown on the series represents important aspects of the Viking mythology. In particular, Rollo has several elaborate tattoo designs. Accompanying all the characteristic weaving knot structures across his torso are a pair of wolves on his arm which represent a deeper cut of Viking folklore than most.

The two wolves Rollo has tattooed are brothers born of the great wolf Fenrir. In Norse mythology, the twin wolves are named Hati and Skoll names that loosely translate to "hate" and "mockery" in English. The two wolves were, in most versions of the tale, the sons of Fenrir and a werewolf mother.

Being a creature of darkness and a son of Loki, Fenrir is eventually imprisoned in magical chains by Odin and the rest of the divine pantheon until the Norse interpretation of the apocalypse, Ragnarok. His wolf sons are enraged by the act, and, after failing to free him, begin chasing the astrological avatars of the sun and moon the siblings Sol and Mani. As in many creationist myths, the brother-sister duo pull the celestial bodies around the world in perpetuity. Fenrir is meant to consume Odin when chaos reasserts itself and Ragnarok arrives, so his sons Hati and Skoll are destined to eventually catch and eat Sol and Mani to plunge the universe back into the darkness from whence it emerged.

In a 2014 video shot for History's YouTube Channel, Vikings makeup department head Tom McInerney and Rollo actor Clive Standen spoke about the character's tattoos. While McInerney initially joked that he had no idea what Rollo's tats meant, and that the makeup team just slapped a bunch on his skin for no reason, Standen interjected with a laugh to explain that "Rollo" means "famous wolf," which factors into the wolf tattoos he has. Keep watching the video to see how Rollo's tattoos on Vikings explained. 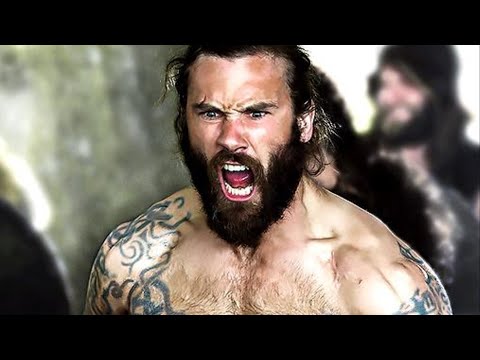