Under communism the Russian Orthodox Church was suppressed - its property confiscated, its followers ridiculed, harassed and imprisoned.

But these days, a resurgent and muscular church is central to President Vladimir Putin's ideas of Russian identity - an echo chamber, say critics - to Kremlin policies at home and abroad.

"Many of Putin's opponents believe the glowing endorsements and mutual back-slaps the Kremlin and the Orthodox Church give each other these days are contributing to ever more tightly defined social and religious conservatism, intolerant nationalism and a growing personality cult around the president," write filmmakers Glenn Ellis and Viktoryia Kolchyna who went to Russia investigate the relationship between Putin and the Russian Orthodox Church.

"...it seemed to us that the rise of the Russian Orthodox Church was unstoppable."

So what lies behind these ever closer ties? What are the implications? And after decades of suppression, how did this renaissance come about? 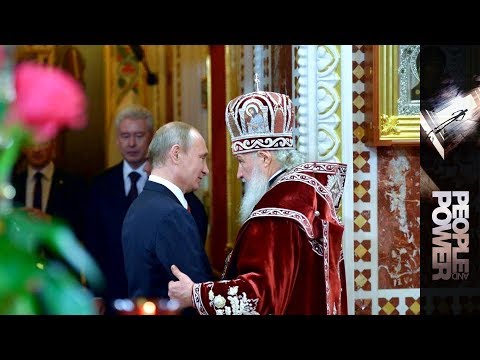 Under communism the Russian Orthodox Church was suppressed - its property confiscated, its followers ridiculed, harassed and imprisoned. But these day...