SENATE DELIBERATES TRUMP VETO & $2,000 CHECKS: The Senate reconvenes after the Christmas holiday to debate overriding Pres. Trump’s veto of the 2021 National Defense Authorization Act. Last night, in a sweeping 322-87 vote, the House handed Trump his first veto override of his presidency in favor of the $740 billion defense spending bill. Though the Senate passed the defense spending bill with a veto-proof majority last week, there is some question as to whether or not enough of Trump’s GOP allies in the Senate will stand by the president and vote against the veto. Trump vetoed the bill for reasons that seemingly had nothing to do with national defense: He was against provisions that call for renaming military bases that are currently named after Confederate leaders, as well as the bill’s failure to repeal Section 230 of the Communications Decency Act, which provides liability protections for social media companies for third-party content on their sites as part of his ongoing battles against Twitter and Facebook.

The Senate is also expected to deliberate the standalone bill to increase stimulus check payments from $600 to $2,000, which the House also passed last night. Many Republicans have been against increased direct payments to Americans, but are now placed in a difficult situation as the call for the larger checks stemmed from the president himself. Senate Majority Leader Mitch McConnell has not yet signaled when the vote on the checks will be held. Other members of the Senate, like Sen. Bernie Sanders and Sen. Ed Markey, have said that they would block any vote on the defense bill override unless the Senate first votes on the stimulus checks.

‘Let me be clear,’ Sanders explained, ‘if Senator McConnell doesn’t agree to an up or down vote to provide the working people of our country a $2,000 direct payment, Congress will not be going home for New Year’s Eve. Let’s do our job.’
» Subscribe to NowThis: http://go.nowth.is/News_Subscribe
» Sign up for our newsletter KnowThis to get the biggest stories of the day delivered straight to your inbox: https://go.nowth.is/KnowThis 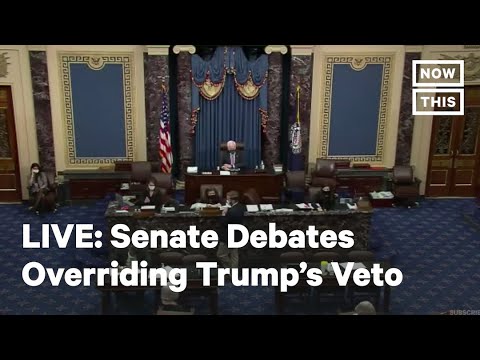