Senators are delivering remarks on the Senate floor after Republicans blocked the conviction of Donald Trump for incitement of insurrection.
» Subscribe to NowThis: http://go.nowth.is/News_Subscribe
» Sign up for our newsletter KnowThis to get the biggest stories of the day delivered straight to your inbox: https://go.nowth.is/KnowThis

Although a majority of the Senate voted that former Pres. Trump is guilty of incitement of insurrection, the final bipartisan 57-43 vote fell short of the two-thirds needed to convict. 7 GOP senators broke ranks with their party and joined Democrats in voting to condemn Trump.

Although this trial will not result in his being barred from holding future office, history will remember Trump as the first president ever to be impeached twice, the first ever to refuse to participate in the peaceful transition of power to his duly elected successor, and the first to preside over a deadly insurrection that broke into the U.S. Capitol in an effort to overturn a free and fair election. 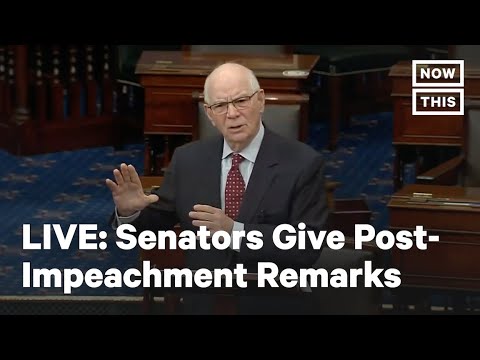 Senators are delivering remarks on the Senate floor after Republicans blocked the conviction of Donald Trump for incitement of insurrection. » Subscri...