Sinai, Sisi and the media - The Listening Post (Lead)

The bombing of a mosque in Egypt's Sinai Peninsula that killed at least 305 people marked the deadliest attack in the country's modern history.

President Abdel Fattah el-Sisi has promised to avenge the dead through the use of what he calls "brute force". He has reiterated that only he can guarantee Egypt's security and stability.

His uncompromising tone was not unexpected, but some of the words he chose were new and worthy of note.

"President Sisi used the term brute force, which is normally associated in Arabic with evil, with injustice rather than justice and upholding the law and preserving security," explains Mohannad Sabry, journalist and Sinai researcher. "And he said it very intensely as if the use of brute force over the past few years in Sinai has not contributed majorly to the worsening situation that we're seeing today."

The Egyptian media landscape has turned into a burial ground for critical journalism.

The US-based Committee to Protect Journalists says at least 26 reporters are behind bars in Egypt, making the country what it calls one of the "biggest prisons for journalists". Of the 180 countries the Paris-based Reporters Without Borders ranks in its annual press freedom Index, Egypt is 161st, below both Turkey and Russia, which is not easy.

I doubt very much whether this kind of regime is going to allow for any access to independent journalism, whether in Sinai, or anywhere else in Egypt for that matter.

Unfettered journalism in print is rare. On the airwaves, it is virtually non-existent, an important factor in a
country with a literacy rate of below 75 percent.

"It's important to remember the role that television plays in a country where there is such a high rate of illiteracy," says Amr Khalifa, analyst and political columnist. "There are millions of Egyptians who are still illiterate. That's why you have somebody like Ahmed Moussa... because he's able to brainwash so many minds by virtue of oversimplifying the arguments."

Access to northern Sinai is tightly controlled by authorities, so Egyptian journalists are often not allowed there - which the authorities insist is for their own safety.

International journalists are locked out, too, but Cairo cannot stop them from broadcasting the images or relaying the facts as they understand them. When that happens, the foreign ministry or the state information service assail those news outlets - and often the countries they are based in.

Meanwhile, the talking heads on Egyptian TV turn criticisms into talking points as if parroting the authorities' intolerance of real journalism, is a form of journalism.

"There is only going to be one source, and that is the military source that's going to be provided through these very popular TV personalities," explains Maha Azzam, head of the Egyptian Revolutionary Council.

"It's a matter of propagating a particular narrative. A narrative that says that the regime is pursuing a successful fight against terrorism. Despite the reality that we know that the escalation of violence has increased four-fold, or maybe even five-fold, since the military coup. And I doubt very much whether this kind of regime is going to allow for any access to independent journalism, whether in Sinai, or anywhere else in Egypt for that matter."

Sinai, Sisi and the media - The Listening Post (Lead) 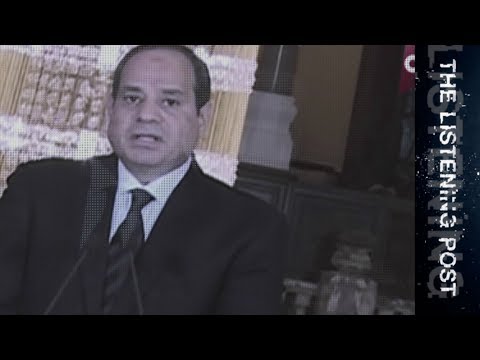 The bombing of a mosque in Egypt's Sinai Peninsula that killed at least 305 people marked the deadliest attack in the country's modern history. Presid...