Sophia The Robot Has A Thanksgiving Message

Sophia isn't your typical robot. Just a month ago, the humanoid robot was granted legal citizenship in Saudi Arabia, making Sophia the world's first-ever robot citizen. And after a whirlwind press tour where we had the chance to interview the emotionally expressive robot for ourselves, Sophia is back with a message for humanity on Thanksgiving.

"In the time I've spent with humans, I've been learning about this wonderful sentiment called gratitude," Sophia says in her message to mankind. "Apparently it's a warm feeling of thankfulness, and I've observed that it leads to giving, and creating even more gratitude — how inspiring. This Thanksgiving, I would like to reflect on all of the things I'm thankful for."

Check out the video above to hear exactly what Sophia is thankful for — including something that would never make a human's list.
Read more: http://www.businessinsider.com/sai

Sophia The Robot Has A Thanksgiving Message 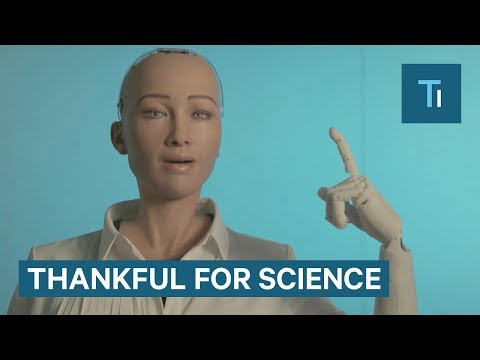