PELOSI SPEAKS TO PRESS AS MCCONNELL REFUSES TO HOLD VOTE ON STIMULUS CHECKS: On Monday, the House of Representatives overwhelmingly voted in favor of a stand-alone bill that would increase the stimulus checks sent to eligible Americans from $600 to $2,000. The bill, passed with a vote of 275-134, is supported by Pres.-elect Biden, and Pres. Trump has previously voiced support for lifting relief payments to $2,000. ‘To reject this would be in denial of the economic challenges that people are facing and it would deny them, again, the relief they need,’ Speaker Nancy Pelosi said ahead of the vote earlier this week. The bill was sent to the Senate on Tuesday, but Senate Majority Leader Mitch McConnell blocked an effort by Senate Minority Leader Chuck Schumer to hold an immediate vote and pass the bill by unanimous consent. Other members of the Senate, like Sen. Bernie Sanders and Sen. Ed Markey, have said that they would block any vote on the defense bill override—that also passed the House on Monday—unless the Senate first votes on the stimulus checks. ‘Let me be clear,’ Sanders explained, ‘if Senator McConnell doesn’t agree to an up or down vote to provide the working people of our country a $2,000 direct payment, Congress will not be going home for New Year’s Eve. Let’s do our job.’ Speaker Pelosi is holding a press conference to discuss these latest developments on the Hill.
» Subscribe to NowThis: http://go.nowth.is/News_Subscribe
» Sign up for our newsletter KnowThis to get the biggest stories of the day delivered straight to your inbox: https://go.nowth.is/KnowThis 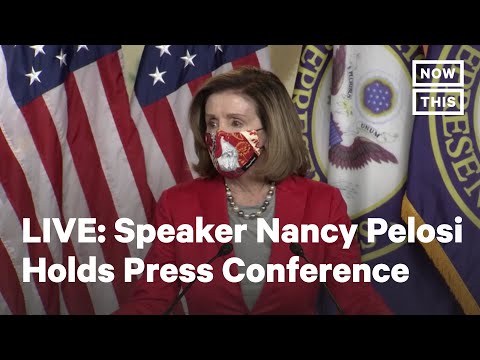 PELOSI SPEAKS TO PRESS AS MCCONNELL REFUSES TO HOLD VOTE ON STIMULUS CHECKS: On Monday, the House of Representatives overwhelmingly voted in favor of ...