JUDGING BY THEIR habits on the Netflix show, you’d think the Stranger Things kids only had time for Dungeons & Dragons, bike-riding, saving their town from a Demogorgon, and feeding their peculiar Eggo obsessions. Turns out, that’s not the case at all.

In the real world—aka Upside Down-free 2017—their down-time activities are decidedly more conventional: texting, roasting their friends’ Instagram posts, filming their own antics. Caleb McLaughlin (Lucas Sinclair), for example, likes to look up old Jodeci videos on YouTube. But, because they’re famous, the Stranger Things gang also get to do some things not everyone gets the chance to do, like when Finn Wolfhard (Mike Wheeler) got to take a picture with Stan Lee.

Photo ops with comics legends are an outlier, though; most of the time the young denizens of Hawkins, Indiana are doing the same stuff on their phones as everyone else. Watch the video above to find out what other LoLs lurk on their devices.

ABOUT WIRED
WIRED is where tomorrow is realized. Through thought-provoking stories and videos, WIRED explores the future of business, innovation, and culture. 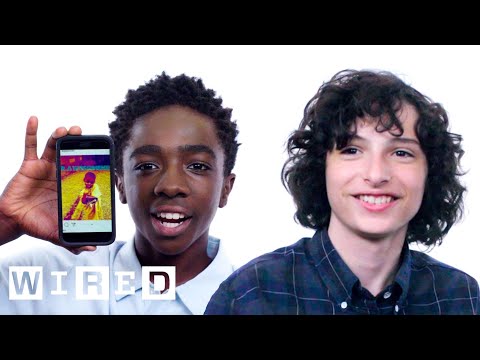 'Stranger Things' stars Finn Wolfhard and Caleb McLaughlin show us the last things they did with their phones. What was the last emoji they used? The ...