Assad and ISIL; the FSA and Al-Nusra Front; SNA, AANES and CJTF-OIR; refugees and resolutions - in 10 years the Syrian war has become a complex and often confusing alphabet soup of death and destruction.

More than half a million people have been killed, millions have been forced from their homes and Syria will likely take generations to heal. And, yet, it rarely makes international headlines anymore.

The forces of President Bashar al-Assad are now in control of most of the country. Away from the battlefield, the suffering continues. The United Nations says 60 percent of the population is food insecure. The Syrian pound has lost 98 percent of its value in a decade, and a World Vision report has put the cost of the war at $1.2 trillion. The overall life expectancy of Syrian children has been reduced by 13 years.

But none of this should be surprising. The trajectory of the war, and the international apathy surrounding it, has been the same for years. In 2015, the Al Jazeera English website ran a special series to mark the war entering its fifth year. But internal analytics showed that a relatively low number of people read the articles or watched the many reports and documentaries.

So what specific consequences does such fatigue have? In this episode of The Stream, we reflect on the last decade of war and ask a panel of experts why paying attention is important. 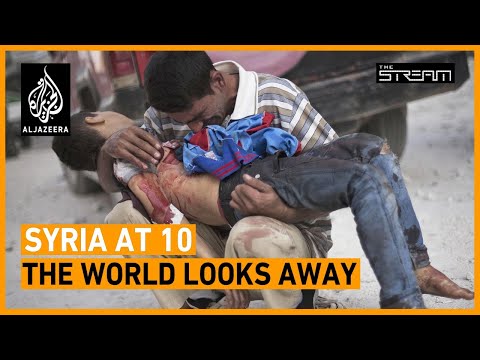 Assad and ISIL; the FSA and Al-Nusra Front; SNA, AANES and CJTF-OIR; refugees and resolutions - in 10 years the Syrian war has become a complex and of...