Taking a knee: NFL as a platform for race politics - The Listening Post (Feature)

When Colin Kaepernick, quarterback of the San Francisco 49ers, took a knee in protest last year, sport fans, the media, and Americans in general, did not quite know what to make of it.

Soon, other NFL football players were also taking a knee during the national anthem, to draw attention to police brutality against African-Americans and racial inequality in the US.
Black Americans are three times more likely to get shot by police than whites are, and are considerably more likely to be shot while unarmed. In most cases, those pulling the trigger are never convicted of a crime.

But that message has been hijacked - or at least overshadowed - by US President Donald Trump, who wants the protesting players fired. He calls them unpatriotic and says they're showing a lack of respect for the national anthem, the flag and the soldiers who often carry the flag into the stadium.

"The president was trying to change the narrative and in fact, he, along with some other people in the media succeeded, so that you would hear less about Black Lives Matter and police brutality ... He converted it into, 'Boy if you're patriotic and you love your country then why wouldn't you stand up for the national anthem?'" says Mary Frances Berry, University of Pennsylvania.

Trump's tactic seemed to backfire when the protests instantly grew in size.

But NFL players, most of whom are black, were not Trump's target audience. Football fans, mostly white and watching on TV, were.

"Donald Trump obviously is not interested in having a conversation about racial inequity in the United States. What he is interested in, fairly explicitly, is playing to the cultural resentments of a certain portion of his white base," says Eric Levitz, a writer for the New York Magazine.

And the league they follow, the NFL, makes a habit of displays of patriotism. The pre-game national anthem usually has a military component to it - some of which, over the years, the Pentagon has paid for.

From 2011-2015, the US military spent millions on the NFL, selling its brand in stadiums packed with thousands - and to television audiences in the tens of millions. Fans had no idea that the flyovers, the tributes to veterans, the soldiers saluting the flag were paid for with their tax dollars.

The Department of Defense spends more on PR than the rest of the US government combined. That budget pays for all the recruitment ads Americans see during football games and other sports broadcasts.

"There is a lot of potential for brand synergy between the NFL and the Pentagon. The stadium offers this stage on which to perform, it gives the Pentagon this opportunity for real spectacle, a real life living celebration of what the Defense Department stands for. It works both as a tool for recruitment, and also as... a propaganda tool to solidify the American people's support for the military and for American foreign policy, and expansive American foreign policy, more broadly," says Levitz.

Taking a knee: NFL as a platform for race politics - The Listening Post (Feature) 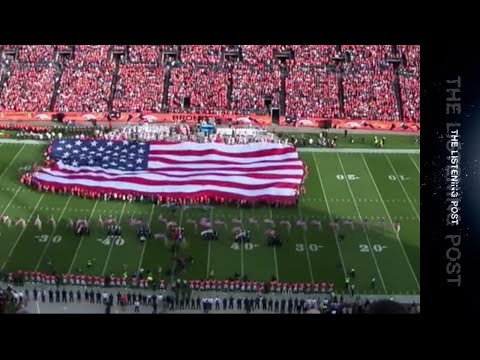 When Colin Kaepernick, quarterback of the San Francisco 49ers, took a knee in protest last year, sport fans, the media, and Americans in general, did ...