The Taliban has fired shots to disperse crowds outside the airport serving Afghanistan's capital after the Islamic group declared on August 24, 2021, that they will no longer allow the evacuation of Afghans. The insurgent group that has seized control of the nation put up roadblocks on the roads to Kabul’s Hamid Karzai International Airport. Thousands of Afghans are still attempting to flee the country, and the US has promised a full withdrawal of its troops from Afghanistan by August 31, ending its 20-year presence triggered by the September 11 attacks. US President Joe Biden has said he is determined to press on with the current August 31 deadline. About 6,000 US troops are still in Afghanistan, assisting evacuation efforts which in the 10 days leading up to August 24 had moved 82,300 people. An estimated 300,000 Afghans are considered to be in danger of being targeted by the Taliban. Top US allies such as the UK, France and Germany have urged the US to allow more time for evacuation operations, but the Taliban warned that the deadline is a “red line” and any extension will lead to consequences. 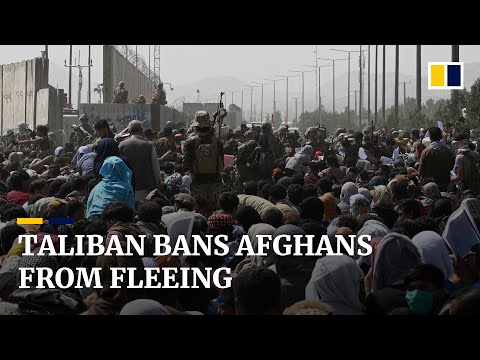 Subscribe to our YouTube channel for free here: https://sc.mp/subscribe-youtube The Taliban has fired shots to disperse crowds outside the airport ser...