The man who helped to bring an end to the country's apartheid policy by developing a one-person-one-vote policy across the country told Al Jazeera he was "very concerned" that race continues to dominate politics in the country, calling for South Africa to "normalise" its politics.

'The ANC is being torn apart'
"[South Africa needs to move] away from ethnically driven politics towards policy-driven politics where people ... irrespective of race or colour can ... work together because they believe in the same things," he told Al Jazeera's Yehia Ghanem.

Pointing to poor economic policy and corruption under Zuma, de Klerk said that the ANC could not continue to exist in its current form.

"Bad leadership has led us to a point where the president of a country has lost his credibility. The ANC is being torn apart by faction fighting at the moment, and we don't have clear, well-balanced, credible and morally sound political leadership in South Africa," he said.

"[The ANC] will split because you have in the same party true red communists, you have people committed to free enterprise, you have people with totally different ideological and policy principles in which they believe," said de Klerk.

"It cannot last. So, I see a split and I think that can be healthy for South Africa." 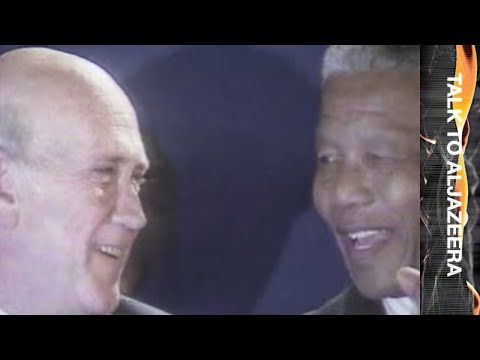