Saudi Arabia, the United Arab Emirates, Bahrain and Egypt have closed their airspace to Qatari aircraft amid a deepening diplomatic row, forcing Qatar's flag carrier to re-route its flights over Iran, Turkey and Oman.

The decision by the four Arab nations to sever diplomatic ties, and cut off sea and air links with Qatar has caused major disruptions to air travel across the Gulf and raised fears for the future of aviation in the region - home to several of the world's major long-haul carriers.

The countries that launched the measures against Qatar have accused it of supporting "terrorism", a claim Qatar has called "unjustified".

So what's at stake for the company at the moment? And what negotiations are taking place?


Andrew Simmons: Welcome to talk to Al Jazeera your Excellency. Now let's get straight to it.

But it must be something of a bitter sweet taste with all that's been going on, this past week, not just here in Qatar, but for the whole region, the effects.

Andrew Simmons: What do you think the level of seriousness is, in this whole crisis?

Akbar Al Baker: On a positive note, let me just say, that I am delighted to announce that Qatar Airways profit of $541m [≈ box office sales of Jurassic Park, 1993].

Akbar Al Baker: It is a record profit, in the history of our airline, and at the same time we have also had a robust passenger number grow, 20.1 percent increase year on year which again is one of the strongest growth figure in our industry.

Akbar Al Baker: So we are very resilient, as an airline. However, I do agree that there are some dark clouds, and I should not be hiding my concern that yes, we will under perform, but not to the extent of our neighbours, because Qatar Airways has a very strong growth plan.

Akbar Al Baker: You know, that, not too long ago I announced that I was going to increase to 24 new destinations.

I couldn't do it, because I had capacity restraint. Now that we have a release, capacity from the 18 destinations, that we have been barred illegally from operating, we are now going to accelerate the other regions of the world, where we feel that we will mitigate the reduction in passenger numbers from this 18 destinations.

Akbar Al Baker: So Qatar Airways has a robust plan B, to continue our march ahead.

Andrew Simmons: Tell me this; let’s just look back first of all, let's start chronologically, back to June the 5th.

Andrew Simmons: Monday morning you were in Cancun, Mexico. Major aviation conference, word came through, I think you were quite late to hear, or a few minutes, went by, before you heard, when you heard, what was it like?

What was going through your head as you boarded that executive jet to fly straight back to Qatar?

Akbar Al Baker: It was very difficult for me to find a way to come here quickly, but I did because, this is a call of duty, for me to be in my country at such a time, where countries around our region has ganged up against my nation, and made land, sea, and air blockade, which is unprecedented in the history of any country a time of peace. That such blockade is conducted.

Andrew Simmons: That's what I want to pick up on. We've heard of air walls. This transcends everything.

Being held to ransom, almost like being in a real war, with an attempted siege going on?

Akbar Al Baker: You know Qatar, is very resilient, and Qatar also has friends, and we have managed to make sure that life will continue as normal.

For an airline, for us, the biggest priority is, for us, to have a gateway in and out of my country, which we are very successfully handling, and at the same time it is our passengers, for which, it is our responsibility.

First, to re-route them, second to give them a full refund if they chose to do so, and thirdly if they choose to travel on Qatar Airways that we give them, the highest amount of care, that we give to our passengers.

Akbar Al Baker: Qatar Airways is very strong, financially we will persevere, and at the same time we will make sure that every single passenger, is guaranteed, that if it chooses after booking on Qatar Airways not to travel on Qatar Airways, we will give them their refund. 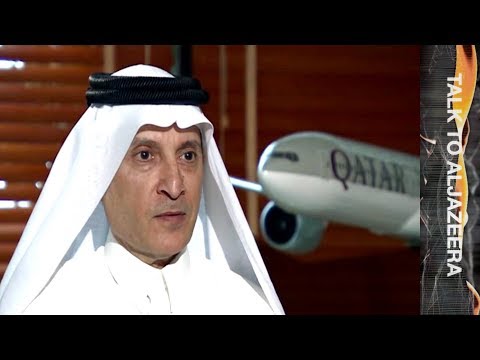 Saudi Arabia, the United Arab Emirates, Bahrain and Egypt have closed their airspace to Qatari aircraft amid a deepening diplomatic row, forcing Qatar...