Sen. Tammy Duckworth is an Iraq war veteran who’s spent the last 8 years serving her country in Congress. Zinhle Essamuah talks to the senator about why she’s been calling for more representation for Asian Americans, the withdrawal of troops from Afghanistan, and more.
» Subscribe to NowThis: http://go.nowth.is/News_Subscribe
» Sign up for our newsletter KnowThis to get the biggest stories of the day delivered straight to your inbox: https://go.nowth.is/KnowThis

Sen. Tammy Duckworth served as a U.S. Army helicopter pilot in Iraq, where she became a double amputee from combat wounds. She later served in the Illinois National Guard, as a U.S. representative, and as senator since 2017. She became the first Thai American woman in Congress and the second Asian American woman in the Senate. We talk to Sen. Tammy Duckworth about the Biden administration’s appointment of a senior liaison for Asian Americans, the recent vote for a bill to combat hate crimes against Asian Americans, President Joe Biden’s announcement for withdrawing U.S. troops from Afghanistan, her calls for firing Postmaster General Louis DeJoy, and much more. 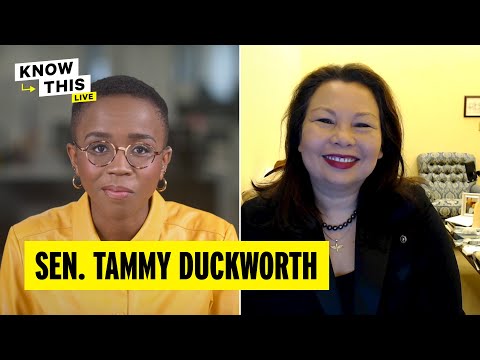 Sen. Tammy Duckworth is an Iraq war veteran who’s spent the last 8 years serving her country in Congress. Zinhle Essamuah talks to the senator about w...