STD cases in the U.S. have reached an all-time high — and the rise of abstinence-only programs might have something to do with it.
» Subscribe to NowThis: http://go.nowth.is/News_Subscribe
» Sign up for our newsletter KnowThis to get the biggest stories of the day delivered straight to your inbox: https://go.nowth.is/KnowThis

In US news and current events today, the CDC has documented a record high transmittance of sexually transmitted infections, known as STIs or STDs. At the same time, abstinence-only programs rather than comprehensive sex education classes, are spreading across the nation. While these programs might be aimed at teen pregnancy prevention, they could be linked to the growing number of STIs, as teens and other young people don't know how to have safe sex using condoms and other forms of birth control.

There’s been a trend toward more abstinence-only education, which studies show does virtually *nothing* to stop people from having sex, and instead could actually be contributing to the U.S. having the highest rates of teen pregnancy and STDs in the developing world.

On the contrary, *comprehensive sex ed* is an alternative that teaches about birth control, disease prevention, and how to have safe, consensual, healthy sex. Why is that so important? Well, let’s take a look at the numbers.

55% of U.S. teens have had sex by the time they’re 18, according to data from the the Centers for Disease Control and Prevention. But only about HALF of sexually active teens said they’d received formal instructions on contraception methods.

In recent years, we’ve seen an even greater shift toward abstinence only education on a federal level. Since 1996, more than $2 billion in federal funds have been spent on programs that push NO SEX BEFORE MARRIAGE.

Those programs got a *rebrand* around 2015 and are now called “sexual risk avoidance” programs - which could be dangerous... aligning SEX with activities like smoking and illicit drug use…both things that could KILL you, rather than provide you pleasure, intimacy, and a family.

But now, things have swung backwards under President Trump. Last year, his administration changed those funding rules to favor groups that promote abstinence. For example, the Christian medical chain, Obria, which explicitly PROHIBITS CONDOMS, received nearly $2 million in federal family planning funds for the first time this year. And Planned Parenthood, the largest provider of sex education, lost a lot of funding. 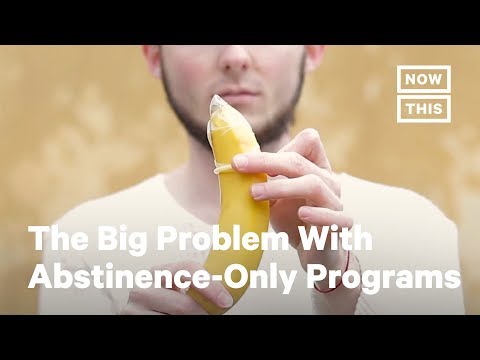 STD cases in the U.S. have reached an all-time high — and the rise of abstinence-only programs might have something to do with it. » Subscribe to NowT...