On The Listening Post this week: Much of India's media spurns a scoop about the son of the Prime Minister's right-hand man, Jay Amit Shah. Plus, how the NFL became a platform for race politics.

A telling media silence has followed a piece of investigative journalism by The Wire this week in India. The news website reported on the finances of Jay Amit Shah, the son of Prime Minister Narendra Modi's right-hand man, Amit Shah.

The story tracked a sudden and exponential jump in the revenues of Jay Amit Shah's businesses after Modi came to power in 2014.

Modi loyalists called the article a hit job; others called it strong adversarial journalism. Mainstream media, however, mostly shunned the story altogether. And that was before Jay Amit Shah took The Wire to court.

Threats - of legal action or much worse - are something Indian journalists are having to contend with more and more often, a state of journalistic affairs the prime minister seems to support - at least tacitly.

- The New York Times and The New Yorker have created a worldwide media feeding frenzy after publishing allegations of sexual harassment against Hollywood film producer Harvey Weinstein – but this week we have learned the story could and perhaps should have come out much earlier.

- Google joins Facebook in admitting it had Russian-bought political ads aimed at influencing the US presidential campaign on its platforms – a month after denying it had such content.

- A freelance photographer has been found dead in Mexico – taking the number of journalists killed there this year to a record high.

NFL as a platform for race politics

Fans of one of the biggest industries on American television, NFL football, have another thing to keep score of this year.

In addition to who won and who lost, the networks are telling them how many players are standing for the national anthem, how many are taking a knee in protest - and what President Donald Trump thinks of it all.

The anthem protests began last year, over police brutality against African-Americans and racial inequality in the US. Donald Trump wants the protesting players fired. He calls them unpatriotic, a tactic that seemed to backfire when the protests instantly grew in size.

But NFL players, most of whom are black, were not Trump's target audience. Football fans, mostly white and watching on TV, were. 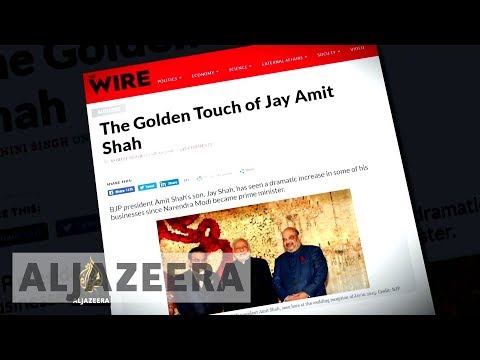 On The Listening Post this week: Much of India's media spurns a scoop about the son of the Prime Minister's right-hand man, Jay Amit Shah. Plus, how t...