When the moment finally came, it caught many Zimbabweans - their media included - by surprise: After 37 years in power culminating in a week-long struggle, 93-year-old Robert Mugabe resigned as Zimbabwe's president.

The transition began when tanks rolled onto the streets of the capital, Harare, and a man in a military uniform appeared on the state-owned TV channel assuring everyone that what looked like a coup and sounded like a coup was, in fact, not a coup.

During seven days of constitutional limbo, the country's mainstream journalists - many of whom had spent decades toeing the government line - seemed unsure who they were taking their orders from, or what line they were supposed to take.

This changed when Emmerson Mnangagwa, a senior member of the ruling Zanu PF party, was eventually sworn in as Mugabe's successor. But how will the end of the Mugabe rule impact the media and freedom of press in Zimbabwe?

Talking us through the week of confusion that ended an era for Zimbabwe's media are:

On our radar:
The US Federal Communications Commission announces plans to repeal rules that safeguard net neutrality.
Google is making changes to its algorithm that will see Russian news agencies RT and Sputnik "de-ranked" on its search engine.
In India, the furore surrounding a yet-to-be-released Bollywood epic leads to a BJP leader placing a bounty on the heads of the filmmakers.
Police vs the press in Uganda
Among the many challenges Ugandan journalists face in order to do their jobs - political intimidation, harassment and bogus charges, for instance - police brutality has become a major concern of late.

The early years of current President Yoweri Museveni's 31-year tenure saw the opening up of the country's media.

In recent years, however, things have begun to change, with the government enacting a string of laws that have made the lives of journalists in Uganda increasingly difficult, and have had a chilling effect on reporting.

The Listening Post's Nic Muirhead reports on when journalism in Uganda crosses paths with policing. 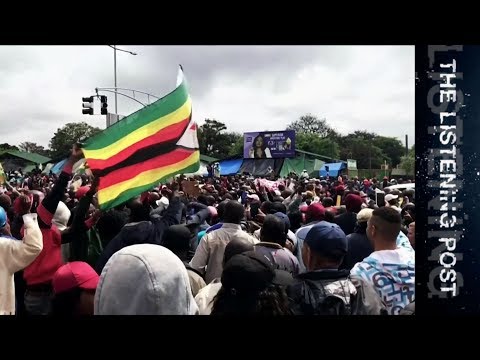 When the moment finally came, it caught many Zimbabweans - their media included - by surprise: After 37 years in power culminating in a week-long stru...