The Listening Post - 'We will respond with brute force': Sisi's narrative on Sinai

On The Listening Post this week: In the wake of the Sinai attack, is Egypt's media taking their cues directly from President el-Sisi's government? Plus, a look back through Robert Mugabe's media legacy.

The bombing of a mosque in Egypt's Sinai Peninsula marked the deadliest attack in the country's modern history.

President Abdel Fattah el-Sisi has promised to avenge the dead through the use of what he calls "brute force." He has reiterated that only he can guarantee Egypt's security and stability.

However, independent journalists have virtually no access to the region and an anti-terror law restricts reporters from publishing anything that contradicts the government's account.

"There is only going to be one source, and that is the military source that's going to be provided through these very popular TV personalities," says Maha Azzam from the Egyptian Revolutionary Council.

"It's a matter of propagating a particular narrative - a narrative that says that the regime is pursuing a successful fight against terrorism. Despite the reality that we know that the escalation of violence has increased four-fold, or maybe even five-fold, since the military coup. And I doubt very much whether this kind of regime is going to allow for any access to independent journalism, whether in Sinai, or anywhere else in Egypt for that matter," she says.

We look at the coverage of the attack - a story that the Egyptian government of President Abdel Fattah el-Sisi wants told its own way.

Russian president Vladimir Putin has signed into law a new legislation allowing the Kremlin to list media outlets that receive funds from outside Russia as 'foreign agents'.
US president Donald Trump takes to Twitter to accuse US broadcaster CNN International of producing fake news - providing convenient cover for the government in Libya.
Zimbabwe: A look back through Mugabe's media legacy

A little more than a week ago, Robert Mugabe was forced to announce his resignation as president after keeping Zimbabwe - and the media there - under tight control for 37 years.

The media landscape he inherited when he took office was tightly controlled by his predecessor, Ian Smith, and it reflected the interests of the country's white minority.

Mugabe did not reverse Smith's media policies but he adopted many of them, ending hopes of a free press. Journalists covering protests, corruption and other stories challenging the government faced harassment, imprisonment and even assault by the authorities.

How will Zimbabwe's new president shape the media landscape?

We look back at Mugabe's media legacy and the state of journalism in the country.

The Listening Post - 'We will respond with brute force': Sisi's narrative on Sinai 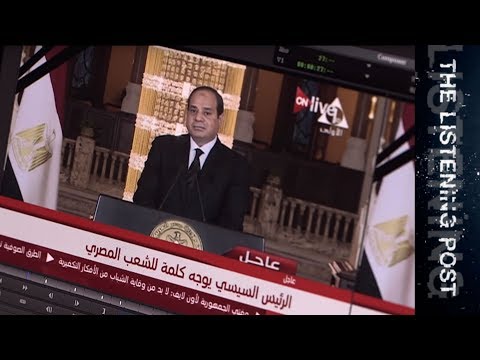 On The Listening Post this week: In the wake of the Sinai attack, is Egypt's media taking their cues directly from President el-Sisi's government? Plu...