Blaming people, even when it's their fault, isn't helpful. Here's what works better. X

In life, sometimes, it’s really not your fault. In fact, sometimes, it is totally someone else’s actions or behaviour who have caused the negative situation or outcome. It is precisely because of them that things are in the terrible state they are now.

At this juncture, it is very important to know what we are going to do. And whatever action we take, what we say, how we behave, is extremely driven by whether we have a blame-mindset.

It’s important to know that we can acknowledge that a person is responsible for something without blaming them.

Blaming someone doesn’t suddenly make them more repentant, it doesn’t correct their wrong or make things right. When we blame, it just brings about a series of negative emotions and intentions in ourselves.

It brings out the worst in us, because blame always brings about a sense of justification that we can behave in however we way we want - we want blood, punishment, revenge, we want the person shamed, embarrassed. We want them to feel bad.

Blaming people is the perfect excuse for our own negative reaction because they brought brought it upon themselves, because that person started it first. That’s having the blame-mindset - it turns us vindictive and equally as negative.

When blame is absent, all we need to focus on is our approach for the best outcome. Someone else, and not me, is responsible for this negative situation. Now, how do I approach this?

Then,we’re in a problem-solving mode. Then we’re working on improving the future, instead of getting stuck in the past because we can’t let go of blame. Having the blame-mindset often allows us to paint ourselves as the victim, a position of the powerless. Cultivating the problem-solving mindset empowers us to find effective ways to approach the situation.

Our minds can only focus on one direction at a time. So cultivate a way of thinking that isn’t about how other people should behave, but how we can behave. This way, regardless of what happens externally, we’ll be happy, always. 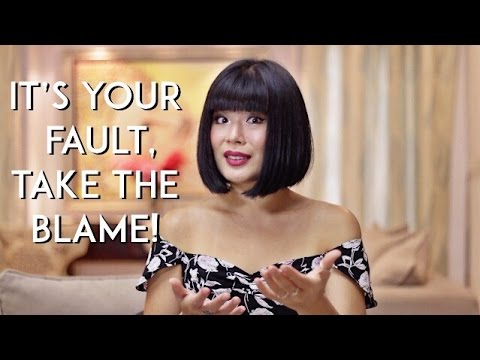 Blaming people, even when it's their fault, isn't helpful. Here's what works better. X To Read: In life, sometimes, it’s really not your fault. ...