How do you make the world care about tens of millions of people on the brink of starvation? That is the question that the United Nations and other international organisations are struggling with while the largest famine threat in recent history is sweeping across nations in central Africa and the Middle East, including Nigeria, South Sudan, Somalia, and Yemen. The situations in these countries are largely man-made by ongoing conflict in mostly agricultural regions. War has decimated infrastructure and markets, and farmers have fled, leaving their crops unharvested. Getting aid to areas controlled by groups like Al-Shabab in Somalia, and Boko Haram in Nigeria is extremely difficult and dangerous.

The cycle is familiar - people fleeing starvation and conflict and fill overcrowded refugee camps. Often it is in these camps that many are affected by diseases that spread easily, like cholera.

In Yemen, 300,000 people have now been infected with cholera. According to Physician’s for Human Rights, all sides of the conflict have deliberately been targeting hospitals, clinics, water treatment plants, and sanitation facilities hastening the spread of disease as “part of a cruel, illegal, and intentional strategy.” The UN just canceled plans to deliver cholera vaccines citing concerns that “the vaccination campaign would not be effective because of the rapid spread of the disease and the difficulties of navigating a country torn apart by civil war.” But before cholera struck, Yemen was already suffering from a severe lack of water and food.

Even though famine in South Sudan has officially been declared over, it’s not as easy as making an official announcement. More than half the population – 6 million people, are “severely food insecure".

Famine is not just about a lack of food. It’s also about water. A person can live for several weeks without food, but can die without water after three days. Livestock, crops, and people all suffer. Drought conditions and climate change in these countries have made a bad situation worse. But there are plenty of resources to go around, and famine can often be predicted years in advance. Why does it take the most dire of circumstances to occur before the international aid community takes action? The Stream discusses in a special two-part programme. 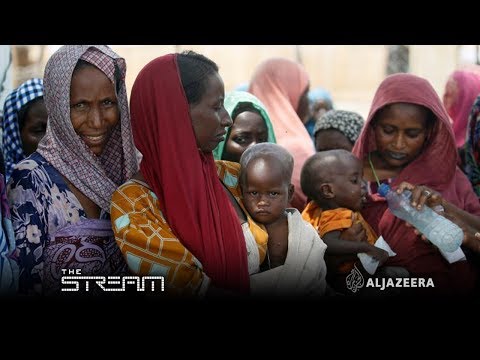 The Stream – Famine and drought How do you make the world care about tens of millions of people on the brink of starvation? That is the question...