The Truth Behind Thor's 'I Knew It' Line In Endgame

With just three words, Chris Hemsworth's Thor spoke for us all in Avengers: Endgame. When Captain America picked up Thor's hammer Mjolnir in the battle scene at the end of the movie, the God of Thunder looked up and said what we were all thinking:

It was one of the most powerful scenes in the whole film, but the exchange didn't always play out as fans saw it on screen.

In Slashfilm's extensive oral history of Avengers: Endgame's final battle, the creative powers behind the film revealed the truth about Thor's "I knew it!" line. Endgame editor Jeff Ford and co-writer Christopher Markus explained that it actually took a bunch of takes with Hemsworth before directors Joe and Anthony Russo found the line that struck the right tone. As it turns out, all of that happened during reshoots. Ford told Slashfilm:

"It was during a reshoot that we shot a bunch of lines from Thor for what he would say, but the best one was, 'I knew it. We had [Hemsworth] on that rock and we were like, 'Say this, and this, now this.'"

Captain America's big moment with Mjolnir was planned out early in the creative process for Avengers: Endgame, but Thor's reaction wasn't. The filmmakers struggled to get it just right. Different emotions and different intonations made for very different meanings, and the Endgame team put Hemsworth through a pretty intense day of filming to really nail down the perfect delivery. Markus explained to Slashfilm:

"They might have all been 'I knew it,' just with different spins. The one that's in the script is happy. I'm sure there was some jealousy, some resentment, some shock it's such a happy moment for the audience that I'm glad we went with the happy one for Thor, because he's sort of the voice of the audience going, ' yes!'"

According to Avengers: Endgame co-writer Stephen McFeely, the Marvel crew knew as early as the summer of 2015 that they wanted to have Captain America wield Mjolnir at some point in the film, but they didn't have the big moment planned out in advance.

As fans recall, Captain America attempted to pick up Mjolnir in 2015's Avengers: Age of Ultron, but only shifted the hammer slightly. Like Thor's celebratory line in Endgame, Cap's ties to Mjolnir changed over time.

During an appearance on Josh Horowitz's Happy Sad Confused podcast, Endgame co-director Anthony Russo explained that Marvel creatives always understood that Captain America was worthy of wielding Mjolnir. In fact, the character himself realized that during Avengers: Age of Ultron when he manages to budge the hammer. Being the good guy that he is, Cap actually chose not to pick up Mjolnir, as he didn't want to hurt Thor's pride. Keep watching the video to see the truth behind Thor's 'I knew it' line in Endgame!

The Truth Behind Thor's 'I Knew It' Line In Endgame 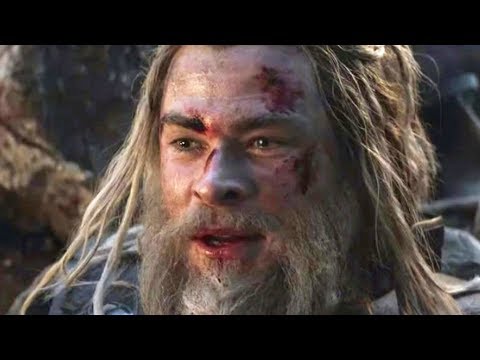 With just three words, Chris Hemsworth's Thor spoke for us all in Avengers: Endgame. When Captain America picked up Thor's hammer Mjolnir in the battl...