The Untold Truth Of Huntress

She was originally introduced as the daughter of Batman and Catwoman, and made her way back from being dead not once, but twice. Let’s take a look at all the incarnations of the Huntress.

Like a lot of the most confusing pieces of the DC Universe, the Huntress has her roots in Earth-2. In her case, though, it's not just a simple story of crossing dimensions. More than anyone else, she shows how an attempt to solve a storytelling problem that didn't really matter gave DC the chance to take their characters in some very unexpected directions.

It starts in the 1960s, when DC decided they needed to explain why there were new characters with the same names as a few of the old ones. The extremely simple solution was to dive headfirst into the idea of parallel worlds. In the pages of Flash, a parallel world called Earth-2 was created as a home for all of the original versions of the DC superheroes.

Of course, the idea of Earth-2 also created a few new problems, like how some of the Earth-2 heroes existed as fictional comic book characters on Earth-1. Barry Allen, for example, chose to name himself "The Flash" because he'd read the same comics about the original Flash, Jay Garrick, that were published in the real world. Apparently nobody ever read the ones about how Batman and Superman were really Bruce Wayne and Clark Kent.

One of the most interesting things about Earth-2 was that DC now had versions of its most popular characters that could change in ways the ones in the main stories never could. Earth-2 Superman was happily married to Lois Lane, while his Earth-1 counterpart was still refusing to settle down as he waged his never-ending battle against evil.

The same went for the Batman family. Dick Grayson grew up, keeping his identity as Robin into adulthood, and Bruce Wayne retired from crime-fighting and married Selina Kyle, better known as Catwoman. Earth-2's Batman and Catwoman would even die after their retirement, prompting an elderly Joker to go on a rampage after being denied a final clash with his arch-nemesis. Long before that, however, Bruce and Selina had a child together.

Her name was Helena Wayne, and as you might expect, it wasn't long before she joined the family business. As a crimefighter, she took the name Huntress and wore a costume that combined Batman's pointy-eared look with Catwoman's traditional purple. What might be surprising, though, is that she wasn't the kind of prominent character you'd expect Batman and Catwoman's daughter to become.

While she starred in a few stories and fought crime alongside the grown-up Robin as the "New Dynamic Duo," Helena Wayne's most prominent appearances came when she took an interdimensional vacation to Earth-1 to spend some time with that world's version of her dad. Of course, meeting up with the alternate reality daughter you fathered with a supervillain is always going to be a little weird, but, you know. It's the DC Universe. You get used to stuff like that. Keep watching the video to see the untold truth of Huntress.

The Untold Truth Of Huntress 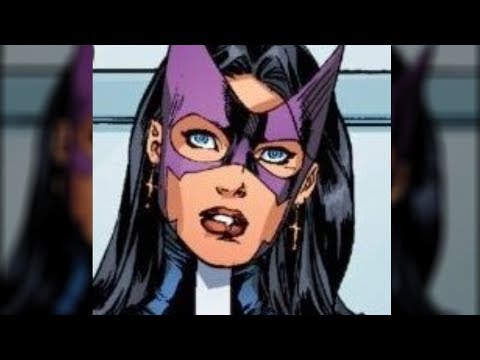 She was originally introduced as the daughter of Batman and Catwoman, and made her way back from being dead not once, but twice. Let’s take a look at ...