The world is poorly designed. But copying nature helps.

Biomimicry design, explained with 99% Invisible. Check them out here: https://99percentinvisible.org/

Japan’s Shinkansen doesn’t look like your typical train. With its long and pointed nose, it can reach top speeds up to 150–200 miles per hour.

It didn’t always look like this. Earlier models were rounder and louder, often suffering from the phenomenon of "tunnel boom," where deafening compressed air would rush out of a tunnel after a train rushed in. But a moment of inspiration from engineer and birdwatcher Eiji Nakatsu led the system to be redesigned based on the aerodynamics of three species of birds.

Nakatsu’s case is a fascinating example of biomimicry, the design movement pioneered by biologist and writer Janine Benyus. It’s the idea that big challenges in design, engineering, and sustainability have often been solved before through 3.8 billion years of evolution on earth. We just have to go out and find them.

This is one of a series of videos we're launching in partnership with 99% Invisible, an awesome podcast about design. 99% Invisible is a member of http://Radiotopia.fm

The world is poorly designed. But copying nature helps. 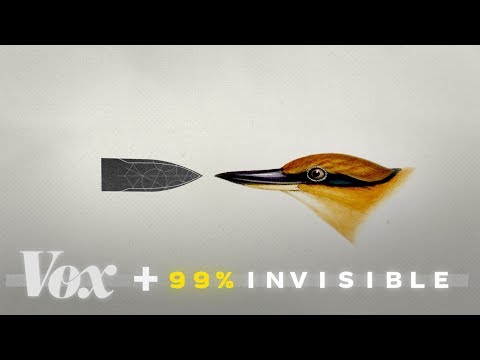 Biomimicry design, explained with 99% Invisible. Check them out here: https://99percentinvisible.org/ Subscribe to our channel here: http://goo.gl/0bs...