Watch what happened after a burglar attempted to rob a restaurant where two plainclothes officers were eating.
» Subscribe to NowThis: http://go.nowth.is/News_Subscribe
» Sign up for our newsletter KnowThis to get the biggest stories of the day delivered straight to your inbox: https://go.nowth.is/KnowThis

In US news and current events today, in Louisville, KY, a robber had walked into Raising Cane’s Chicken Fingers in Louisville brandishing a gun at approximately 10 pm local time. The suspect reportedly began demanding money from the staff. Little did he know, there were two police officers who happened to be dining there at the time. After a few seconds, two plain clothed officers got up from their table where they had been enjoying their food. They ran the suspect out of the restaurant with guns. The officers were able to catch him & arrest him before any money was taken. The robber appeared in court on February 17. He is charged with robbery, receiving stolen property and possession of a handgun by a convicted felon. 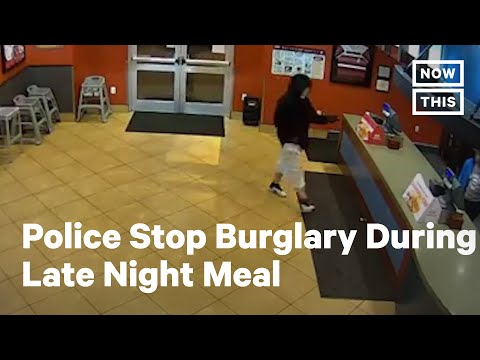 Watch what happened after a burglar attempted to rob a restaurant where two plainclothes officers were eating. » Subscribe to NowThis: http://go.nowth...