Sen. Josh Hawley said he would file objections to presidential election results on Jan 6 to stand up for the '74 million Americans who feel disenfranchised'
» Subscribe to NowThis: http://go.nowth.is/News_Subscribe
» Sign up for our newsletter KnowThis to get the biggest stories of the day delivered straight to your inbox: https://go.nowth.is/KnowThis

In US news and current events today, GOP Senator Josh Hawley commits
to challenging election results. Congress will meet in a joint session on January 6 to count and certify Electoral College ballots. At that session, objections to states’ certifications can be made but only are heard when signed by a member of the House & the Senate. So far, a number of Trump supporting reps have said they would file objections to overturn results. Sen. Josh Hawley is the first senator to say he would also object. It is unclear which or how many states’ results Hawley will object to, though he has criticized Pennsylvania specifically in a statement. His decision has been widely criticized, even by Senate Republicans. After an objection is heard, both chambers of Congress debate and then vote on it. Sen. Mitch McConnell reportedly urged senators not to force such a situation. Hawley has parroted Pres. Trump’s unfounded claims of widespread voter fraud. There has been no evidence of widespread voter fraud. 90+ federal & state judges have ruled against Trump & his allies’ attempts to overturn election results.The objections to certification are likely to fail given the Dem majority in the House & significant pushback in the Senate. For more U.S. politics and 2020 election news, subscribe to NowThis News. 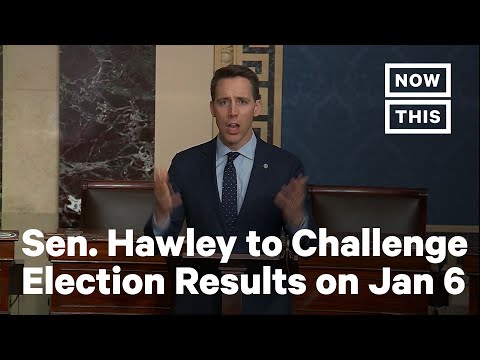 Sen. Josh Hawley said he would file objections to presidential election results on Jan 6 to stand up for the '74 million Americans who feel disenfranc...