This Is One Of The Biggest Misconceptions About Sharks

Sharks often get a bad rap, but they aren't necessarily out to make you their lunch. We spoke with Coyote Peterson, who hosts the popular YouTube channel Brave Wilderness, about one of the biggest misconceptions when it comes to sharks. Following is a transcript of the video.

Coyote Peterson: That sharks are just straight-up man-eaters, which they aren't.

I'm Coyote Peterson. I'm a host of the Brave Wilderness Channel on YouTube.

Oftentimes, the only reason you're attacked by a shark is because, A: you're in the shark's environment — if you're out there swimming in the ocean — and sharks oftentimes mistake humans for prey.

So imagine yourself on a paddleboard or a surfboard. From underneath, you look like a sea lion or a sea turtle.  So that shark comes into the environment, and what it's doing, it's investigating, right?

Sharks never just grab onto something and tear it apart. Their method for catching their prey is actually to come in and do a test bite. Oftentimes, that test by can be so lethal, it ends up killing the prey.

And imagine how soft the human body is. If a tiger shark comes up and thinks, "Mmm ... maybe you're a sea turtle," and takes a bite, swims away, you're gonna to be in pretty bad shape.

So it's oftentimes people die from shark bites, not so much being eaten by sharks.

If you are in the process of being attacked by a shark, the sensory perception organs that they have in their nose, specifically their noses and their eyes, that's how they sense their environment.

So being able to hit an animal on its snout like that can oftentimes detur them from continuing the attack.

So if you're in the position where you're being attacked by something like a shark, obviously fight with your life no matter what you can do, to make sure that you can get away.

This Is One Of The Biggest Misconceptions About Sharks 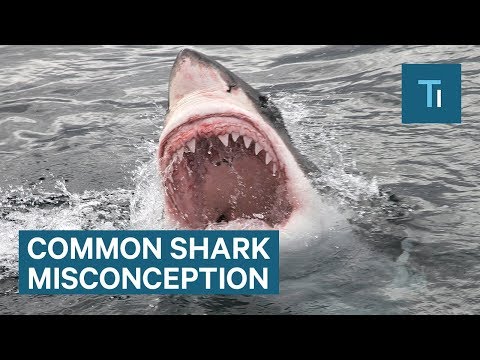 Sharks often get a bad rap, but they aren't necessarily out to make you their lunch. We spoke with Coyote Peterson, who hosts the popular YouTube chan...