Get ready for a tragicomic clash of the symbiotes.

Venom star Tom Hardy recently took to Instagram to post cool fan art based on the classic tragedy and comedy masks that date back to Greek theater. These have a lot more tongue, though.

Hardy clearly relishes playing the iconic Marvel antihero, and the artwork makes reference to Venom's post-credits scene, which indicated that Venom will have his hands full in his second outing on the big screen. In the scene, Hardy's Eddie Brock, an investigative reporter, visits serial killer Cletus Kasady, played by Woody Harrelson, to write a story about him. After a brief and creepy round of niceties, Kasady makes a statement that's equal parts threat and promise.


"When I get out of here, and I will, there's gonna be carnage."

Brock may be a bit morally conflicted, but Kasady created by writer David Michelinie and artist Erik Larsen answered the unnerving question of what would happen if a symbiote were to take control of a truly evil person: Carnage, a being so unbelievably malevolent and dangerous that in the comics, Spidey and Venom have been forced to team up on multiple occasions to stop him. Harrelson's return to take on the villainous mantle in Venom 2 was confirmed earlier this year, and it's plain that Hardy is clearly pumped for fans to witness the epic throwdown.

Hardy captioned the image with a coded message which, interestingly, could be read as "We are Venom 2" as in the numeral two, or the word "too," meaning "also." In the comics, Kasady's symbiote was a spawn of Venom, so there could be some interesting subtext there.

There's been widespread speculation that Venom 2 will carry an R rating, but producer Avi Arad told Collider in 2018,

"When you hear Carnage, the only thing you can think of is R. But, if you know his story, if you really know the comic, there's no R there. He's a tortured soul. It's not about what he does [...] What you have to show is, what is the motivation? Was he born like that, or [is he] someone we should feel for? Because if you succeeding in making a villain someone you can feel for, jackpot."

If Venom 2 indeed carries the same PG-13 rating as its predecessor, this opens the door to another question, especially in light of the recent breakup and reconciliation between Sony Pictures and Marvel Studios: Keep watching the video to see how Tom Hardy teases Venom vs. Carnage with cool artwork! 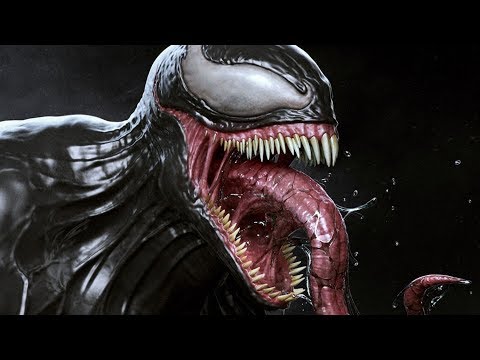 Thumbnail Image by David Masson → https://www.instagram.com/p/B1y9AeXDgv3/ Get ready for a tragicomic clash of the symbiotes. Venom star Tom Hardy rec...