LIVE RESULTS—DEMS APPEAR ON THE BRINK OF WINNING SENATE: Democrat Rev. Raphael Warnock is projected to have defeated GOP incumbent Sen. Kelly Loeffler in the special election runoff for the U.S. Senate in Georgia. He will be Georgia's first Black senator. ‘I stand before you as a man who knows that the improbable journey that led me to this place in this historic moment in America could only happen here,’ Warnock said when he declared victory in the early hours of Wednesday morning. ‘We were told we couldn’t win this election, but tonight we proved that, with hope, hard work and the people by our side, anything is possible.’

Democratic challenger Jon Ossoff is ahead in the other runoff race against GOP Sen. David Perdue. With roughly 98% of the vote reported, Ossoff currently leads Perdue by a margin of 17,000 votes. Ossoff spoke to his supporters in a video posted on social media this morning declaring victory, though there are still roughly 73,000 votes to be counted. ‘Everybody who cast your ballot, everybody who put your faith and confidence in our democracies capacity to deliver the representation that we deserve whether you were for me, or against me, I’ll be for you in the U.S. Senate,’ Ossoff said. ‘I will serve all the people of the state.’

Georgia officials estimate that about 4.6 million Georgians voted, setting a turnout record for a statewide runoff election in the Peach State.
» Subscribe to NowThis: http://go.nowth.is/News_Subscribe
» Sign up for our newsletter KnowThis to get the biggest stories of the day delivered straight to your inbox: https://go.nowth.is/KnowThis 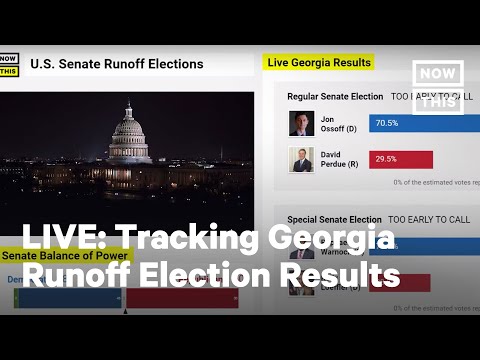