Are you a Trekkie who wants to see if our picks line up with yours? Or do you just want some shows that can help you squeeze out a few tears? Either way, here are our nominations for the saddest episodes of Star Trek ever.

After a long and stressful mission, the crew of the Defiant receives a distress call from a Starfleet captain shipwrecked on an inhospitable planet. At first, the crew can only hear the transmissions from Captain Lisa Cusack, but can't respond. Soon, Chief O'Brien's tinkering establishes two-way communication. With the Defiant still days away and Cusack having nothing to do but slowly suffocate, Sisko establishes shifts for his officers, including himself, to sit by the communicator and keep their stranded colleague company.

"But some part of me is always saying 'They may not be here tomorrow.'"

Captain Cusack proves to be a gift to her would-be rescuers. With the crew struggling under the weight of the Dominion War, Cusack happily gives a sympathetic ear to their problems. She helps O'Brien see he's keeping his friends at arm's length because he's afraid of growing too close to people the war may take from him, and lets Sisko see why having his girlfriend, Kasidy Yates, aboard the Defiant bothers him so much.

When the Defiant finally reaches its destination, the crew is shocked to discover Captain Cusack has been dead for three years. An energy barrier surrounding the planet somehow allowed for the Defiant's transmissions to reach her in the past, and hers to connect with them in the future. They bring Cusack back to DS9 for an Irish wake where the crew gathers to honor her and to share the lessons their friend taught them.

At first, Star Trek: The Next Generation's "The Offspring" seems like it might become another exploration of the rights of synthetic life. After Data surprises his friends with the reveal that he's created a new android named Lal, Captain Picard is extremely concerned about the ramifications. His fears are realized when a Starfleet Admiral demands Lal be taken off the Enterprise to be placed under the supervision of Starfleet scientists.

Hallie Todd's portrayal as Data's android daughter Lal is sweet, funny, and ultimately heartbreaking. Like her father, Lal is confused by human behavior but does her best to learn, doing things like grabbing Will Riker without warning for a kiss or telling Data that she believes she has mastered the art of humor because so many children laugh at her.

Lal unexpectedly grows beyond Data's programming and develops the ability to feel emotions. Unfortunately she can't survive them. After being overcome with fear at the prospect of separation from Data, her systems experience a critical failure. Keep watching the video to see all the tragic Star Trek episodes we still can't get out of our heads. 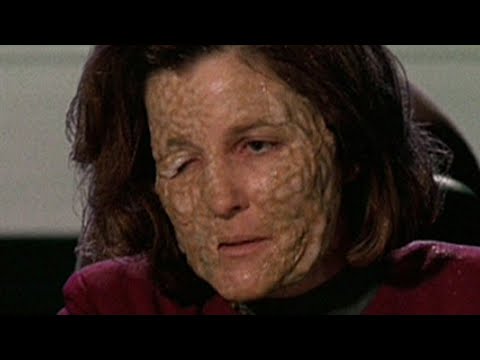 Are you a Trekkie who wants to see if our picks line up with yours? Or do you just want some shows that can help you squeeze out a few tears? Either w...