Ukraine has requested Turkey to detain the Russian-flagged cargo ship Zhibek Zholy carrying grain taken from the Russian-occupied port of Berdyansk, according to a Ukrainian official and a document seen by the news agency Reuters.
The Ukrainian foreign ministry official, citing information received from the country’s maritime administration, said the Zhibek Zholy had loaded the first cargo of some 4,500 tonnes of grain from Berdyansk, which the official said belonged to Ukraine.
In a letter dated June 30 to Turkey’s justice ministry, Ukraine’s prosecutor general’s office said separately that the Zhibek Zholy was involved in the “illegal export of Ukrainian grain” from Berdyansk and headed to Karasu, Turkey, with 7,000 tonnes of cargo – a larger cargo than cited by the official.
Turkey’s foreign ministry did not immediately reply to a request for comment by Reuters on the arrival of the Zhibek Zholy. 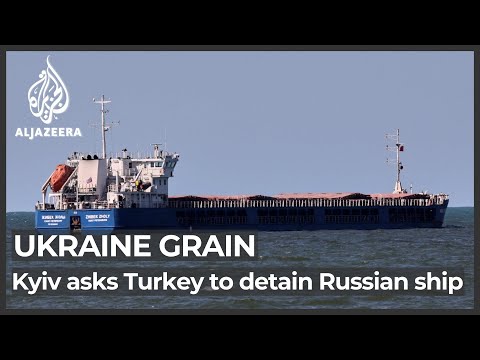 Ukraine has requested Turkey to detain the Russian-flagged cargo ship Zhibek Zholy carrying grain taken from the Russian-occupied port of Berdyansk, a...