The United States Supreme Court has rejected a long-shot lawsuit filed by Texas and backed by President Donald Trump to challenge the presidential election results, effectively dealing Trump another blow in multiple failed attempts to overturn Joe Biden’s victory.
In its decision on Friday, the Supreme Court said it denied Texas’s motion for leave to file a complaint about vote tallies in Pennsylvania and three other US states “for lack of standing” under the US Constitution.
“Texas has not demonstrated a judicially cognizable interest in the manner in which another state conducts its elections,” the court stated.
Trump repeatedly has sought to overturn the results of the November 3 election.
Biden, his Democratic challenger, was declared the winner after securing enough Electoral College votes to win the White House - and he has begun announcing government department nominees and shaping his incoming administration’s policies.
Al Jazeera's Victoria Gatenby reports. 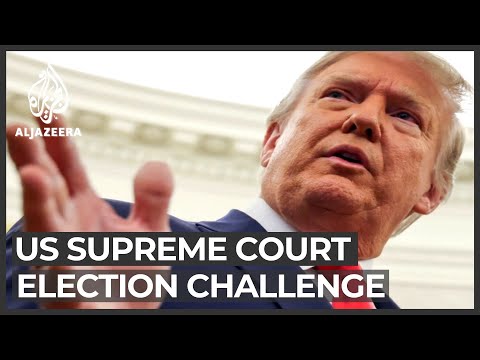 The United States Supreme Court has rejected a long-shot lawsuit filed by Texas and backed by President Donald Trump to challenge the presidential ele...