Venezuela in default: What next? - Counting the Cost

Oil-rich Venezuela has always paid its debts - even at the expense of its citizens.

But this week, everything changed: Venezuela is now officially in default, which means it's officially bankrupt.

Rating agency Standard & Poor's declared the nation in 'selective default' on Monday after it failed to make $200m in repayments for global bonds due in October.

As more payments are due, Venezuela is facing what could be a messy financial unravelling. And that's not a good situation for its starving population as state assets may have to be sold off to pay credit holders.

President Nicolas Maduro is acutely aware that he is running out of money, and he wants to restructure the billions owed to China, Russia and oil service providers.

Russia has already agreed to restructure $3bn worth of debt held by Moscow. But US sanctions mean that other credit holders can't even be in the same room as those negotiating the restructuring. And it's not clear what's going to happen next.

"Where we go from here is anyone's guess," explains Edward Glossop, an emerging markets economist at Capital Economics in London. Venezuela's debt "restructure talks look doomed to fail and it's only a matter of time before the government and state-owned oil company outright defaults on its external debt."

Zimbabwe's broken economy: Zimbabwe's army seized control of the country on Tuesday night, claiming it was removing "criminals" around Robert Mugabe, and held the president and his family under house arrest. But can the military intervention really bring change for the country's ailing economy?

The price of Bitcoin jumped as much as 10 percent on Zimbabwe's Golix exchange on Wednesday after the country's army seized power. Zimbabweans, just like Venezuelans, are buying things they think might retain value.

Lebanon's economic squeeze: Caught in the middle of a bitter Saudi-Iran rivalry, worries are growing about the outlook for the Lebanese economy. Growth has slowed to just over two percent a year from an average of eight percent before the war in Syria. But regional rivalries between Saudi Arabia and Iran have raised fears of a Qatar-style blockade.

The recent resignation of Prime Minister Saad Hariri in Riyadh under mysterious circumstances has not been resolved. Just before he quit, the government had managed to pass a budget after years of political stalemate.

Sami Atallah, the director of the Lebanese Center For Policy Studies in Beirut assesses why this matters for the region.

Digital pills: It's been called the world's first digital medicine, and analysts say it could open up a new frontier in the Internet of Things. The US Food and Drug Administration just approved a digital pill. Basically, it's a sensor the size of a grain of sand. Once swallowed, it will send data to a smartphone app when patients have taken their medication. Kristen Saloomey reports from New York.

Lab meat: Research shows that the global meat industry produces more greenhouse gas emissions than all cars, planes, trains and ships combined. But scientists in the Netherlands say they are close to bringing laboratory-grown meat to the market. This could slice emissions and save energy, reports Fleur Launspach from Amsterdam.


More from Counting the Cost on:

Venezuela in default: What next? - Counting the Cost 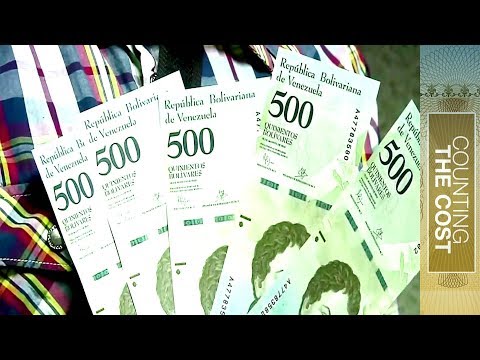 Oil-rich Venezuela has always paid its debts - even at the expense of its citizens. But this week, everything changed: Venezuela is now officially in ...