What Hanson Is Up To Today

Isaac, Taylor and Zac first started performing together as a band back in 1992. Five years later they were household names with their hit single "MMMBop." The three brothers have been recording songs and touring the world ever since, and they've also started their own record label and beer company. We chatted with Hanson about their current tour, how they got into the beer business, and what's next for the trio. Following is a transcript of the video.

Zac: Hi. I'm Zac. That's Taylor. This is Isaac. We all have the same last name. It's Hanson.

We are a band called Hanson.

Taylor: We've been playing music for 25 years, and somehow we have not killed each other yet.

Zac: Yes.Which is really the only achievement we've achieved. As far as achievements go.

So, one of our most famous songs is called "MMMBop."

Talking about how we got started is a little different than, I think, most bands, because ...

Taylor: We were so young.

Zac: We're brothers. And two:  we were incredibly young. I was 6.

We played a ton of schools. And we were able to sort of be this reflection of potential for kids. That was really the first place we saw screaming girls.

Zac: I think that's why maybe we weren't quite as shocked by it when, you know ...

Taylor: when it happened in a big way.

They say that you're most likely to meet your significant other at work. And we are a part of that statistic. We all met our wives playing concerts.

Our inspiration was '50s music. Was rock 'n roll. Was looking at young artists who had started in their teens. The Jackson 5 and Chuck Berry ...

We started a record company, you know, on our third album, before I was twenty years old.

We have put out six major studio albums. We have a global fan base that we still tour with all the time, year after year.

We chose to start a record company, because we could see that there wasn't a future at a major label that was focused on quarterly earnings and sort of stacking stacking artists like assets that they could just trade.

We set up a distribution deal, built a new team with a new management company, and did a lot of stuff that nobody had any idea how to do.

Isaac: Which I think is one of the more important things really, about the kind of craft beer experience. At least for us in a lot of ways. Besides obviously making quality beer. But the community itself actually felt very similar to the music community.

Taylor: Mmmhops is a title of a beer, not the whole company, but the title of our first beer. And it is definitely one of those, you know, names that's so ridiculous that it just had to be. It had to exist. And it's been fun to share that with people.

The Christmas album has been a long time coming. And ever since the first one, which was received so well ...

There was a trickle of, "Are you guys gonna make a follow-up?"

People expect to be reflective. To be reminiscent. To go back and be nostalgic. And so they expect to open up the box of things that they loved, and come back to it.

Zac: Certain anniversaries just can't be ignored. And when we reached 25 years this year, it seemed like it was important to kind of stop and look back a little bit more than we normally would.

Taylor: You know, the future of music is not just this one-way street. Where we send things out, and then people applaud. It's you share music, and you get a response. And then you hear the response. And you hear the interaction between fans. And then you keep trying to create opportunities for that to grow. And, for us, there actually are potentially twenty-five more years or more in our future, if we choose it. And it feels like we're at a place where we can make that choice.

What Hanson Is Up To Today 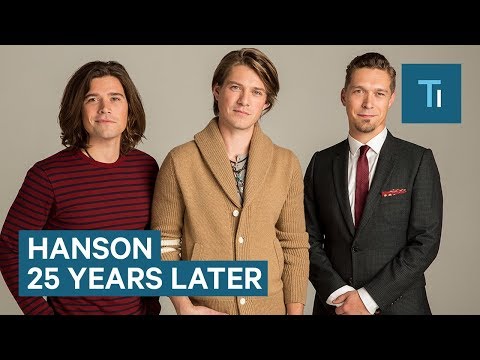 Isaac, Taylor and Zac first started performing together as a band back in 1992. Five years later they were household names with their hit single &quot...