What If The Earth Were Flat?

Today, it's nearly impossible to believe the Earth is anything but round. But for most of our history, humans have thought Earth was flat.

The one concept our ancient ancestors were missing was gravity. Gravity's effects are the key to determining whether the Earth is actually flat, or not.

On a sphere, gravity pulls in the same direction everywhere on the surface. But on a disc, gravity changes direction as you move toward the edge.

At the center, you feel a downward pull just like on spherical Earth. But as you move out, gravity starts pulling sideways as well as a downwards.

This would wreak havoc on sports played in different parts of the world. A ball thrown straight up in the air mid-way out, would curve down and backward toward the disc's center. Plus, a ball thrown mid-way out wouldn't go nearly as high or far as a ball thrown up at the edge where gravity's downward pull is practically zero.

But sports are just the beginning. Since plant stems grow opposite to the direction of gravity, an effect called negative gravitropism, you'll see forests grow at an increasingly sharp angle the farther you are from the center.

Continue toward the edge and you feel like you're climbing a hill that's growing steeper with each step as the backward pull of gravity takes over. At Earth’s end, that hill will feel like a 90-degree cliff, pulling you back to the center. But if you could make it over the edge, and stand on the thin outer part of the disc, you'll feel downward pull just like on spherical Earth.

However, living here would be like living in a desert. Gravity's backward effects pull on the oceans too, making it impossible for any water to reach the edge. Instead, sea levels will gradually rise as you travel in, making the world's center an aquatic metropolis.

So, the next time you see an apple fall straight to the ground, thank your lucky stars that Earth is round. Because if it were flat, that apple might actually hit you in the face.

What If The Earth Were Flat? 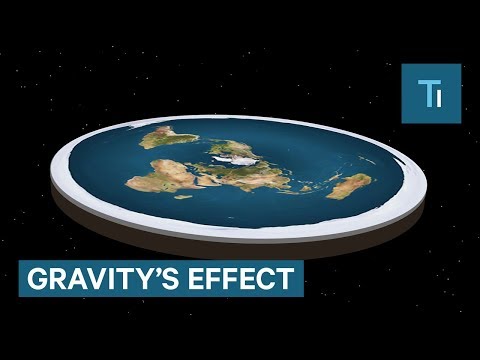 Today, it's nearly impossible to believe the Earth is anything but round. But for most of our history, humans have thought Earth was flat. The one con...