What makes a good African leader? - The Stream

Mo Ibrahim, the Sudanese-born British billionaire philanthropist made his fame and fortune by bringing mobile phone service to tens of millions of Africans across the continent. Now, he is known for the Mo Ibrahim Foundation, and its prize, considered the world’s largest, for good governance and leadership, awarded to departing African leaders that fit criteria established by the foundation.

Celtel International was founded in 1998 and went on to be a trailblazer in establishing communications on the African continent. The company is famous for never having paid a bribe, a story Ibrahim is fond of telling. Since he sold Celtel in 2005 for 3.4 billion, he has been focused on his foundation’s work and the annual index of African governance; an index with that measures political, social, and economic factors in all 54 countries. It is an ambitious tool, meant to increase accountability and provide Africans with information to ask questions of their leaders and governments.

The foundation’s prize was created as an incentive for African leaders to shun corruption, step down at the mandated time, and to provide departing African leaders with a livelihood after leading. The prize is not without some controversy, as some critics have said it’s akin to bribing a leader simply to do the right thing, or rewarding them just for doing their job. It awards $5 million USD over 10 years when the selected leader steps down, and $200,000 USD thereafter for life. But every year has not seen a laureate awarded. Since it began in 2006, only five individuals have been given the prize, and the prize has not been awarded for the last three years, highlighting the political challenges faced by some African countries.

The Stream meets with Ibrahim to discuss African governance, his foundation’s work, and the driving forces in Africa right now.

What makes a good African leader? - The Stream 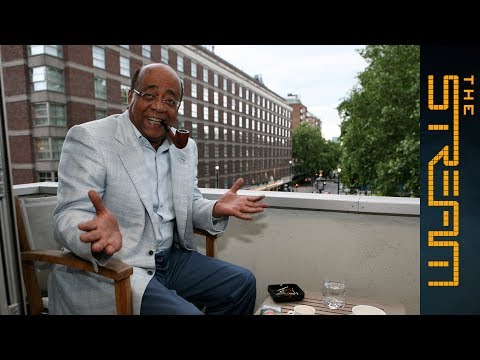 Mo Ibrahim, the Sudanese-born British billionaire philanthropist made his fame and fortune by bringing mobile phone service to tens of millions of Afr...