Americans spend more than seven hours a day starting at digital screens. This screen time often leads to blurred vision, eyestrain, and long-term vision problems like nearsightedness. What’s more, screens emit blue light, which disrupts our circadian rhythms at night when we’re trying to fall asleep. And all of this screen time might even change our brains. A new and ongoing study supported by the NIH found that some pre-teens who clocked over seven hours a day on screens had differences in parts of their brains compared to kids who spent less time on screens.

It’s 11:00 pm. You should be asleep. But you’re watching a video on your phone. Tomorrow, you’ll wake up and go to work, where you’ll stare at your computer for 8 hours. When you get home, you’ll watch a movie on TV. And if you’re anything like the average American adult, you spend more than 7 hours a day staring at digital screens.

So, what’s all this screen time actually doing to your body and brain? Humans didn’t evolve to stare at bright screens all day. And our eyes are suffering the consequences. An estimated 58% of people who work on computers experience what’s called Computer Vision Syndrome. It’s a series of symptoms that include:

- eyestrain
- blurred vision
- headaches
- and neck and back pain

And long-term, this amount of screen time could be damaging our vision permanently. Since 1971, cases of nearsightedness in the US have nearly doubled, which some scientists partly link to increased screen time. And in Asia today, nearly 90 percent of teens and adults are nearsighted. But it’s not just the brightness of our screens that affects us. It’s also the color. Screens emit a mix of red, green, and blue light — similar colors in sunlight. And over millennia, it was blue wavelengths in sunlight that helped us keep our circadian rhythms in sync with our environment. But since our circadian rhythms are more sensitive to blue light than any others,

A problem occurs when we use our screens at night. Typically, when the sun sets, we produce the hormone melatonin. This hormone regulates our circadian rhythms, helping us feel tired and fall asleep. But many studies have found that blue light from screens can disrupt this process.

For example, in one small study, participants who spent 4 hours reading e-books before bed for 5 nights produced 55% less melatonin than participants who read print books. What’s more, the e-book readers reported that they:

But perhaps the most concerning changes we’re starting to see from all this screen time is in kids’ brains. An ongoing study supported by the NIH has found that some pre-teens who clocked over 7 hours a day on screens had differences in a part of their brains called the cortex.  That’s the region responsible for processing information from our five senses.

Usually, our cortex gets thinner as we mature. But these kids had thinner cortices earlier than other kids who spent less time on screens. Scientists aren’t sure what this could mean for how the kids learn and behave later in life. But the same data also showed that kids who spent more than 2 hours a day on screens scored lower on thinking and language skill tests.

To be clear, the NIH data can’t confirm if more time spent staring at screens causes these effects. But they’ll have a better idea of any links as they continue to follow and study these kids over the next decade. It’s no doubt that screens have changed the way we communicate. But only time will tell what other changes are on the horizon for humankind. 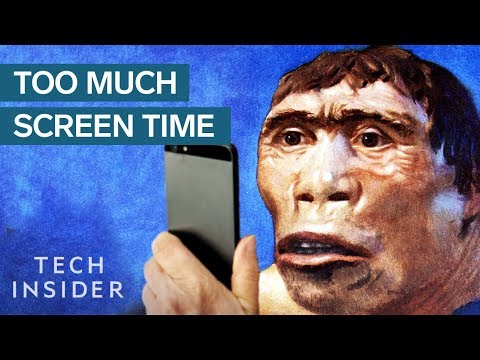