Science fiction films have long depicted black holes as portals through space and time or gateways to other dimensions. And now, physicists have found that black holes might be suitable for hyperspace travel after all.

Black holes skirt the line between science fiction and science fact. On the one hand, scientists have seen real black holes in action, consuming unsuspecting stars that pass too close. But where reality ends and fiction takes over is at the edge of a black hole – a place called the event horizon, where no spacecraft has ever gone.

So, whatever happens beyond that boundary, inside of a black hole, is anyone’s guess. Scientists agree that if you travel far enough into a black hole, gravity will eventually become so strong that it kills anything in its path. But sci-fi films are more optimistic, depicting black holes as portals through space and time or gateways to other dimensions. And it turns out, some scientists now think the sci-fi buffs may be onto something. Black holes might be suitable for hyperspace travel, after all; it just takes the right kind of black hole.

At the center of every black hole is a point of infinite density, called a singularity. It’s what gives black holes their strong gravitational pull. And for decades, scientists thought singularities were all the same, so anything that passed the event horizon would be destroyed the same way: by being stretched and pulled like an infinitely long piece of spaghetti.

But that all changed in the early 1990s when different research teams in Canada and the US discovered a second singularity called a “mass inflation singularity.” It still has a strong gravitational pull, but it would only stretch you by a finite amount, and potentially NOT kill you in the process, meaning, you might survive the trip through a black hole. More specifically, through a large, rotating black hole, which is where these types of singularities exist.

Now, astronomers obviously can’t travel through a black hole yet to test this theory. In fact, the best place to test this is at the supermassive black hole in the center of our home galaxy, the Milky Way, which is 27,000 light years away. Not conveniently close to the least.

Therefore, scientists instead run computer simulations to see what would happen if we did manage to reach an isolated, rotating black hole, and now, for the first time, a team of scientists at UMass Dartmouth and Georgia Gwinnett College has done exactly that.

Lior Burko: “You would feel a slight increase in temperature, but it would not be a dramatic increase. It’s just that you don’t have enough time to respond to the very strong forces. It would just go through you too quickly.”

As for what happens once you get through to the other side, no one really knows, but Burko has his own ideas. He says one possibility is that we’d arrive at some other remote part of our galaxy, potentially light years away from any planets or stars, but a second, and perhaps more intriguing, a possibility is that we’d arrive in a different galaxy altogether. That's if you even make it that far.

Scientists say more research is needed before we’re anywhere close to successfully traveling through a black hole. But when we are ready, one of the safest passageways might be the supermassive black hole at the center of our galaxy called Sagittarius A*, and it might just be our ticket out of the Milky Way. 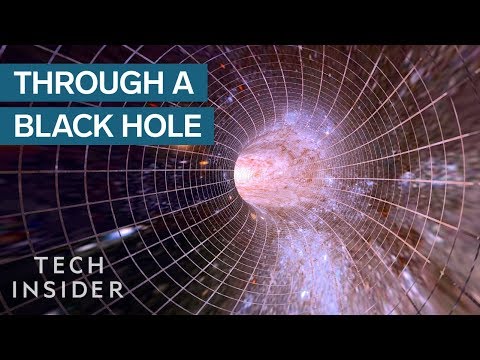 Science fiction films have long depicted black holes as portals through space and time or gateways to other dimensions. And now, physicists have found...