Nicolas Maduro, who’s been president for the past 5 years, and Juan Guaido, the opposition leader of the National Assembly, both say they have a constitutional right to the office. The disagreement has caused international backlash and dozens of countries have picked sides.

How did it reach this point?

First, let's talk a little about how this all unfolded.

The crisis escalated in the beginning of January, when the relatively unknown Guaido first gained prominence when he was sworn into office as the head of the National Assembly - the opposition held legislative body that was stripped of its power in 2017 by the country’s pro-Maduro supreme court.

He immediately began his campaign against Nicolas Maduro’s government - calling it illegitimate.

His claim stemmed back to the widely criticized 2018 presidential election. Guaido claims the country had no legitimately elected president at the beginning of the new presidential term, because of the quote “sham election.” So he assumed office.

On January 23, he swore himself in as interim president of Venezuela in front of thousands of supporters.

And some Latin American countries, like Colombia, Brazil and Peru immediately came out in support of Guaido. But his most notable supporter, however, was the United States.

But Maduro isn’t giving up without a fight. 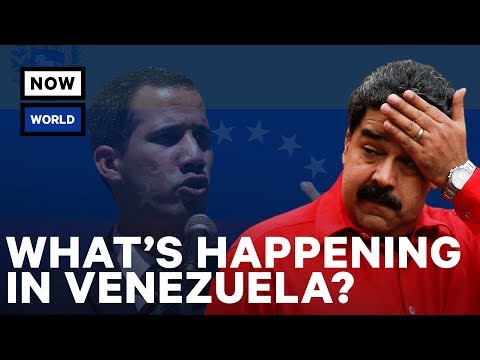 Both Nicolas Maduro and Juan Gerardo Guaidó Márquez are claiming to be Venezuela's president, in Venezuela’s latest power struggle. But how can Nicola...